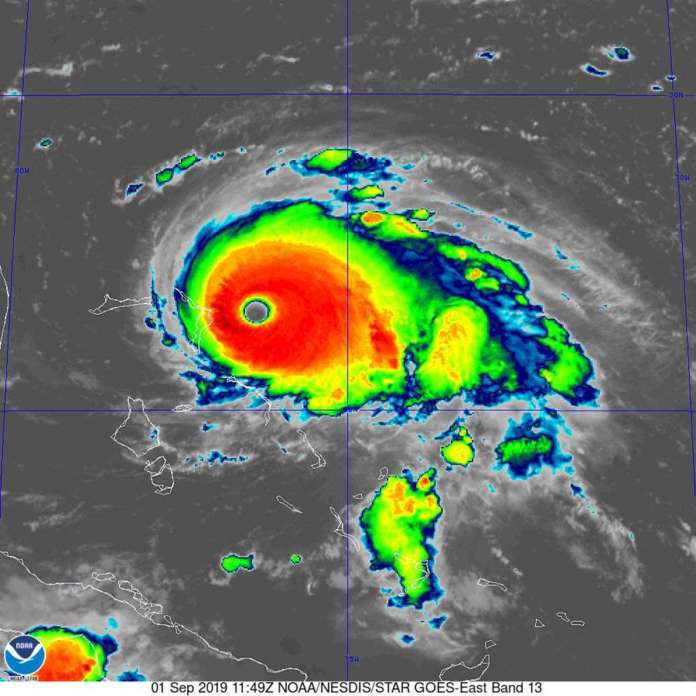 Hurricane Dorian is centered as of 11 a.m. EDT about 230 miles (30 km) east-northeast of Great Abaco Island and about 205 miles (330 km) east of West Palm Beach, Florida. Dorian is moving toward the west near 7 mph (11 km/h). A slower westward motion should continue for the next day or two, followed by a gradual turn toward the northwest. On this track, the core of extremely dangerous Hurricane Dorian will continue to move over Great Abaco and move near or over Grand Bahama Island later tonight and Monday. The hurricane should move closer to the Florida east coast late Monday through Tuesday night.

Maximum sustained winds have increased to near 180 mph (285 km/h) with higher gusts. Dorian has grown larger in size. Hurricane-force winds extend outward up to 45 miles (75 km) from the center and tropical-storm- force winds extend outward up to 140 miles (220 km). Ham radio reports indicate that Hope Town in the Abacos just reported wind gust to 100 mph. Dorian is a extremely dangerous category 5 hurricane on the Saffir-Simpson Hurricane Wind Scale. The minimum central pressure measured by both NOAA and Air Force reconnaissance plane was 913 mb (26.96 inches). Some fluctuations in intensity are likely, but Dorian is expected to remain a powerful hurricane during the next few days.

A life-threatening storm surge will raise water levels by as much as 18 to 23 feet above normal tide levels in areas of onshore winds on the Abaco Islands and Grand Bahama Island. Near the coast, the surge will be accompanied by large and destructive waves.

The combination of a dangerous storm surge and the tide will cause normally dry areas near the Florida east coast to be flooded by rising waters moving inland from the shoreline. The water could reach the following heights above ground somewhere in the indicated areas if the peak surge occurs at the time of high tide.