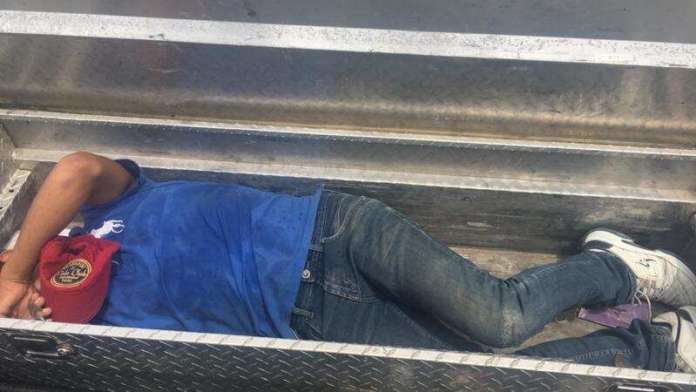 DEL RIO, Texas – Del Rio Sector agents were busy over the weekend, with 10 smuggling cases that led to the arrest of 14 human smugglers and 26 illegal aliens.

Those cases are in addition to the arrest of two U.S. citizens who attempted to smuggle a Honduran national through the immigration checkpoint on Highway 57, near Eagle Pass, earlier in the week. The smuggled alien was found locked inside of a pickup truck toolbox with no means of escape.

“Many lives have been lost in horrible conditions caused by smugglers locking immigrants in toolboxes, car trunks, and tractor trailers,” said Del Rio Sector Patrol Agent in Charge Raul L. Ortiz. “With temperatures over 100 degrees and no way to escape, this could have ended tragically.”

Del Rio Sector has apprehended over 53,000 illegal alien this fiscal year. In addition to the inherent dangers of traveling great distances to reach the U.S. Border, many illegal immigrants find themselves at even greater risk at the hands of human smuggling organizations that subject them to confined spaces such as vehicle trunks and utility toolboxes.

All the smugglers arrested face a charge of 8 USC 1324, alien smuggling, which can carry a maximum sentence of 20 years in prison.