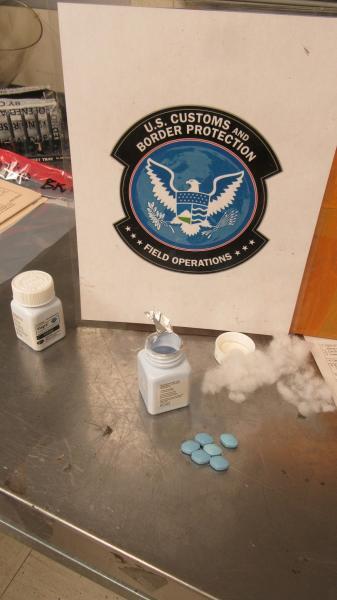 CINCINNATI—Last Thursday, January 7, Cincinnati CBP officers seized 33 ½ pounds, approximately 10,350 pills, of Viagra in two shipments destined to an individual in Brooklyn, NY. If genuine, the pills would have had an estimated manufacturer’s suggested retail price (MSRP) of approximately $238,050.

The bottles had labels stating they were made in the USA, but those claims are suspect as the pills were being imported from the Middle East with potential ties to Hong Kong and China.

Medications purchased from online sources can be improperly produced without pharmacological specifications and safeguards that ensure the protection of human health. Prescription medications manufactured in non-regulated foreign companies often contain dangerous contaminants or ineffective compounds, and though their packaging and labelling can be similar to genuine products, inconsistent ingredients and sub-par quality controls can endanger the consumer.

“Our officers and specialists are exceptional at anticipating and identifying illicit shipments of controlled medications, and they are entrusted with enforcing hundreds of laws for other government agencies,” said Cincinnati Port Director Richard Gillespie. “We work to maintain our interagency ties to ensure a strong border with secure and compliant cross-border trade.”

“FDA is committed to protecting public health with our other government agency partners by working to secure the drug supply chain against counterfeit and unapproved medications that enter the United States through fraudulent sources,” said Dan Solis, Assistant Commissioner for the Office of Enforcement and Import Operations in FDA’s Office of Regulatory Affairs.