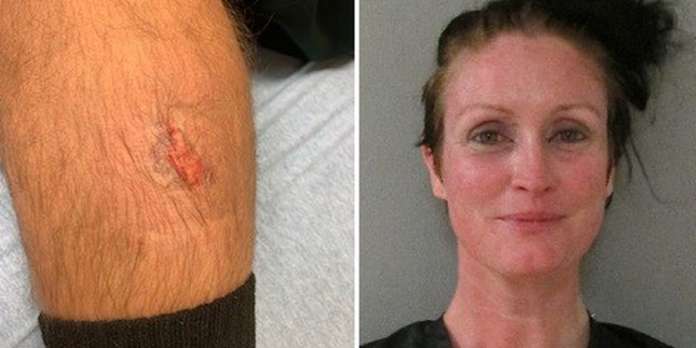 FLAGER COUNTY, FL — (Scroll Down For Video) — Deputies responded to 58 Brookside Lane in Palm Coast on January 17 due to a domestic disturbance. Deputies made contact with 38-year-old Cherie Saunders in the driveway of her residence with her make-up smeared, no shoes, slurred speech, and a heavy scent of alcohol coming from her person.

During the investigation into the disturbance it was determined that Saunders had slapped a male resident inside the home. While deputies were attempting to resolve the situation, Saunders became extremely argumentative and would not cooperate with the investigation. Saunders approached a deputy in a threatening manner. Saunders began kicking and screaming when deputies attempted to secure her in handcuffs.

During the struggle one deputy was bit by Saunders on his right calf and she refused to release her bite hold until another deputy was able to free her grip on his leg. The bite resulted in a two-inch mark which immediately showed broken skin, swelling, and bruising. Moments later, the deputy who was bitten began to feel ill and lost consciousness momentarily. He was transported to the hospital for a medical evaluation.

Americans Should Prepare For “Significant Disruptions” To Their Lives From Coronavirus,...