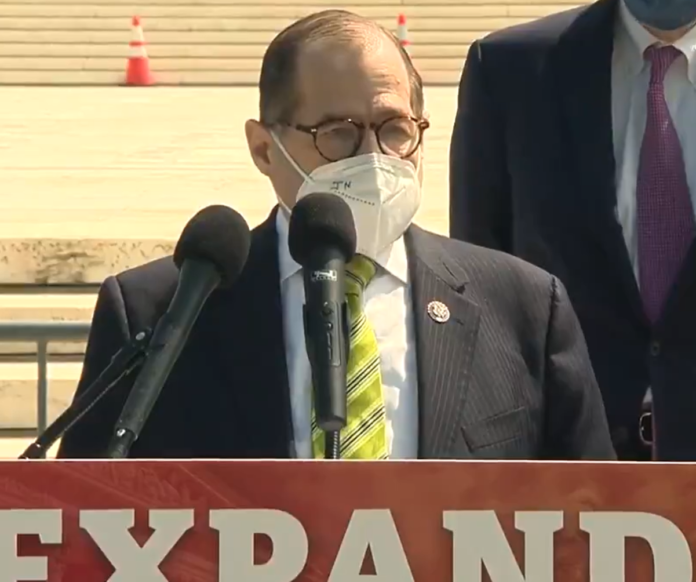 The democrats say the legislation would “restore balance to the nation’s highest court after four years of norm-breaking actions by Republicans led to its current composition and greatly damaged the Court’s standing in the eyes of the American people.”

“Nine justices may have made sense in the nineteenth century when there were only nine circuits, and many of our most important federal laws—covering everything from civil rights, to antitrust, the internet, financial regulation, health care, immigration, and white collar crime—simply did not exist, and did not require adjudication by the Supreme Court,” said Chairman Nadler. “But the logic behind having only nine justices is much weaker today, when there are 13 circuits. Thirteen justices for thirteen circuits is a sensible progression, and I am pleased to join my colleagues in introducing the Judiciary Act of 2021.”

“Republicans stole the Court’s majority, with Justice Amy Coney Barrett’s confirmation completing their crime spree,” said Senator Markey. “Of all the damage Donald Trump did to our Constitution, this stands as one of his greatest travesties. Senate Republicans have politicized the Supreme Court, undermined its legitimacy, and threatened the rights of millions of Americans, especially people of color, women, and our immigrant communities. This legislation will restore the Court’s balance and public standing and begin to repair the damage done to our judiciary and democracy, and we should abolish the filibuster to ensure we can pass it. I thank Chairman Nadler, and Reps. Johnson and Jones for their partnership on this legislation that will ensure the Supreme Court reflects the value of equal justice under law, not politics.”

“It’s easy to take for granted that the number of justices on the Supreme Court must be nine,” said Representative Johnson. “But it is not written in the Constitution and has changed seven times over the course of this country’s history. Thirteen justices would mean one justice per circuit court of appeals, consistent with how the number of justices was originally determined, so each justice can oversee one circuit. It’s time that we start thinking about the Supreme Court like we think about the rest of the federal government and consider whether and how its current composition allows it to effectively do what we need it to do — efficiently and effectively administer justice and uphold the rule of law. I am pleased to join my colleagues, Senator Markey, Chairman Nadler, and Representative Jones in taking an important step in that direction today with the introduction of the Judiciary Act of 2021.”

“Our democracy is hanging by a thread. And the far-right majority on the U.S. Supreme Court is cutting it,” said Representative Jones. “From Citizens United to Shelby County to Rucho, the Court has been hostile to democracy itself. If a law suppresses the right to vote, it is constitutional; if a law protects the right to vote, especially for Black and brown voters, it is unconstitutional. The American people have had enough. To restore power to the people, we must expand the Supreme Court. Today, I am proud to introduce the Judiciary Act of 2021 to do just that.”

A copy of the legislation can be found HERE.