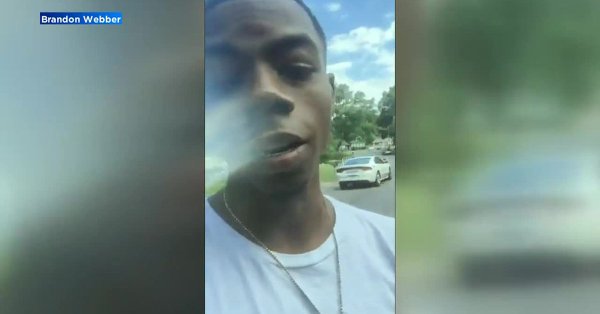 MEMPHIS, Tenn. — TBI Agents are investigating an officer-involved shooting that occurred in the Frayser Community of Memphis, Wednesday evening.

Officials say around 7 p.m., multiple officers with the United States Marshals Service – Gulf Coast Regional Fugitive Task Force encountered Brandon Webber, 20, wanted on multiple warrants, outside of a home in the 2000 block of Durham Street as he was getting into a vehicle. While attempting to stop the individual, he reportedly rammed his vehicle into the officers’ vehicles multiple times before exiting with a weapon. The officers fired striking and killing Webber. No officers were injured in the shooting.

Video, since removed from Facebook, shows Webber taunting officers driving by. “On God. Look at these bitches. They gonna have to catch me homie. Ima do they ass so bad.”

Following the incident, residents began gathering at the scene. Some threw rocks and bottles at officers — 24 were injured. Police car windows were smashed out and nearby stores were looted. At least two protesters were arrested.

According to WMC reporter Janice Broach, Webber was wanted for shooting a man five times who was trying to sell a car in Hernando, Mississippi. The victim survived the shooting.

Webber was reportedly in the stolen car when he was approached by US Marshals.