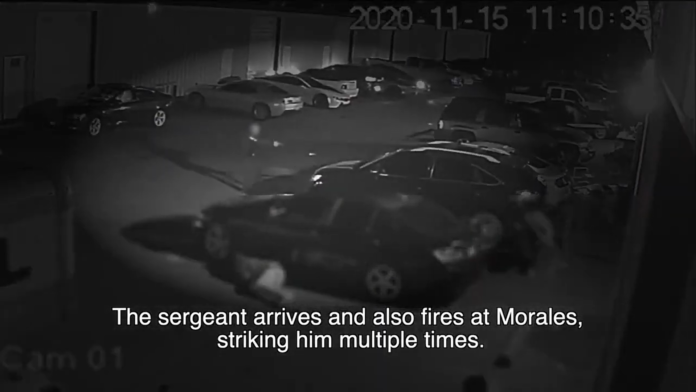 Sacramento, California — On November 14, 2020 at approximately 6:30 p.m., Sacramento Police Department patrol officers responded to reports of reckless driving on the 1600 block of Juliesse Avenue in North Sacramento. When officers arrived on scene, they observed a boxing event at a warehouse on that block. A patrol sergeant remained in the area to conduct administrative tasks unrelated to the event. At approximately 8:00 p.m. the sergeant observed a crowd beginning to flee from the warehouse. One witness running from the scene told the sergeant that a Hispanic male was armed with a gun.

Shortly after, the sergeant heard shots being fired in the area of the warehouse. The sergeant ran towards the gunfire and confronted an armed suspect who was pointing a firearm at the crowd inside of the warehouse. The sergeant discharged his firearm, striking the suspect. The suspect was later identified as 38-year-old Augustine Morales. Surveillance footage from the same time frame captured Morales acting erratically and recklessly waving a firearm in the direction of the crowd. The surveillance footage also captured Morales approaching the open doors of the warehouse and aiming his gun at the crowd while an unknown subject inside of the building fired a weapon in his direction.

Almost immediately after, the sergeant arrived and fired at Morales. Officers rendered medical aid to Morales until relieved by Sacramento Fire Department personnel. The suspect was transported to a local hospital, where he was pronounced deceased. His firearm, and a partially loaded magazine, was recovered on scene. Officers located a victim of a shooting who had sustained a non-life-threatening gunshot wound. Based on the investigation thus far, it is not believed the victim was struck by the sergeant’s firearm. The shooter from the warehouse has not been identified at this time.