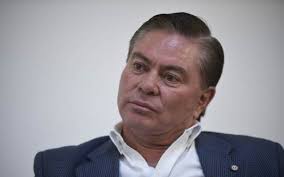 Mario Estrada was sentenced to 180 months in prison for participating in a conspiracy to import and distribute tons of cocaine to the United States.

Manhattan U.S. Attorney Geoffrey S. Berman said: “Mario Estrada conspired to solicit Sinaloa Cartel money to finance a corrupt scheme to get him elected president of Guatemala. Estrada promised to assist the cartel to export tons of cocaine into the U.S., and he attempted to arrange the assassinations of political rivals. Thanks to the DEA, rather than a shot at the presidency in Guatemala, Estrada is headed to prison in the United States.”

According to the allegations in the Indictment to which Estrada pled guilty, public court filings, and statements made in court:

While he was running for president of Guatemala in 2018 and 2019, Estrada attempted to solicit funding from international drug cartels to support his presidential campaign (the “Estrada Campaign”). During certain of these negotiations, members of the Estrada Conspiracy, including Estrada and his co-defendant, Juan Pablo Gonzalez Mayorga (“Gonzalez”), interacted with purported members and associates of the Sinaloa Cartel – a powerful international drug-trafficking organization based in Mexico – who were, in fact, confidential sources (the “CSes”) acting at the Drug Enforcement Administration’s (“DEA”) direction. At times during the course of his negotiations with the CSes, Estrada was polling in the top five of candidates for the Guatemalan presidency.

In addition, during the course of his meetings with the CSes, Estrada bragged of his other drug cartel connections. More specifically, Estrada stated that the Jalisco Nuevo Generación cartel in Jalisco, Mexico, had offered him financial support in connection with his campaign, and also boasted that he was working with a drug trafficker in Guatemala who was supporting his bid for president. Further, at various times during their negotiations with the CSes, Estrada and Gonzalez also directed the CSes to hire hitmen to assassinate political rivals and their associates to ensure that Estrada was elected president of Guatemala. In particular, ESTRADA and Gonzalez identified specific targets by name and agreed to provide the hitmen with firearms, including AK-47s, to carry out the murders.

In addition to his prison term, Estrada , 59, of Guatemala City, Guatemala, was sentenced to four years of supervised release.