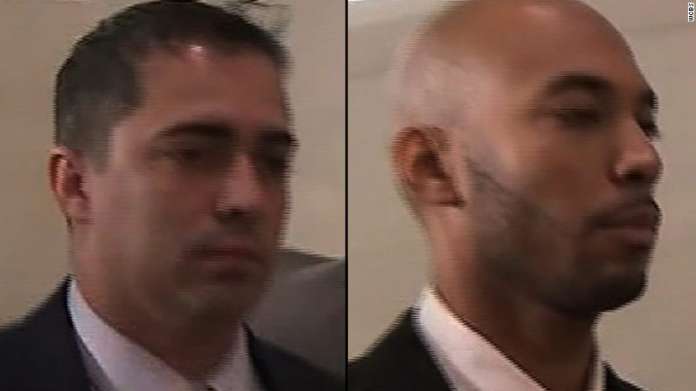 Two former New York City Police detectives pleaded guilty to bribe receiving and official misconduct for having sex inside a police van with a young woman they had arrested, before releasing her without authorization and without reporting the arrest. While prosecutors requested incarceration, the defendants were promised five years’ probation in exchange for their guilty plea.

District Attorney Eric Gonzalez said, “These defendants engaged in a shocking abuse of power which they finally acknowledged. While I would have preferred to see them serve prison time, they are no longer members of our police department and with today’s plea are convicted felons. As a result of this disturbing incident, New York passed a law to prohibit police officers from having sex with people in their custody, closing a loophole that had allowed officers to claim the sex was consensual. We could not apply the new law retroactively, and serious credibility issues in this case precluded us from proceeding on additional charges, yet we remained committed to holding these defendants accountable.”

The District Attorney identified the defendants as Eddie Martins, 39, and Richard Hall, 34, who were formerly assigned to the NYPD’s Brooklyn South Narcotics. They pleaded guilty today to the indictment against them – two counts of third-degree bribe receiving and nine counts of official misconduct – before Brooklyn Supreme Court Justice Danny Chun, who indicated he will sentence each defendant on October 10, 2019 to five years’ probation over prosecutors’ objections. The District Attorney’s Office requested a term of incarceration of one to three years. Because the defendants pleaded guilty to the entire indictment, the plea agreement was offered by the Court and without prosecutors’ consent.

The District Attorney said that, according to the investigation, on September 15, 2017, at approximately 7:30 p.m., the defendants, who were on-duty and riding in a Dodge Caravan, working as part of a team of plainclothes detectives assigned to Brooklyn South Narcotics and conducting a buy and bust operation in the confines of the 60th Precinct, left their post without authorization and drove to Calvert Vaux Park in Gravesend, Brooklyn.

Just after 8 p.m., the officers conducted a car stop of an Infinity Coupe driven by an 18-year-old woman with two male passengers. There was a quantity of marijuana in the front seat cup holder. The officers instructed the three occupants to step out of the car and asked if they had any drugs on them, according to the investigation. The young woman responded she had marijuana and two Klonopin pills. The detectives handcuffed the woman, told her she was under arrest and would be getting a desk appearance ticket. They let her companions go, the evidence showed.

After leaving the park, while inside the police van, the woman had sexual intercourse with Martins and performed a sex act on Hall, according to the evidence. The defendants then drove back to the vicinity of the 60th Precinct in Coney Island and released the woman, giving her back the Klonopin pills. They did not report the incident to their supervisor or to anyone else and had no authority to rescind the arrest or to release the detainee, according to the indictment.

DNA recovered from the woman was a match to both of the defendants. Video surveillance shows the woman exiting the police van at approximately 8:42 p.m., the investigation found.