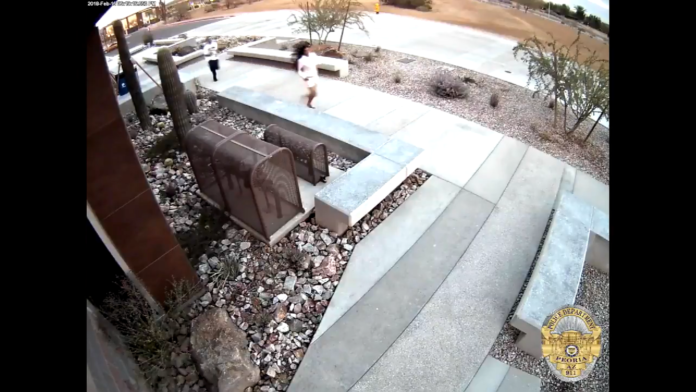 ARIZONA — (Scroll Down For Video) — On Friday, February 16, at 6:10 PM, Peoria Police Department – Arizona were dispatched to a suspicious circumstance / possible shoplifting in the area of 24650 North Lake Pleasant Parkway. The caller provided a vehicle description and a license plate to Peoria dispatchers. While enroute to the call one officer noticed a vehicle matching that description at the gas station at 23336 N Lake Pleasant Parkway. As the officer approached the vehicle, two subjects took off running southbound from the gas station.

The suspects ran directly toward the front doors of our north precinct building. It should be noted that there is a very large “Peoria Police” sign above the door. They continued to run along the building and then decided to hop the fence into the secure area of the Police Department. It just so happens that several officers were at the facility training that day. The male suspect jumped back over the fence onto the roadway where officers took him in custody. The female suspect decided to hide under a bench in the secured area and was taken into custody.