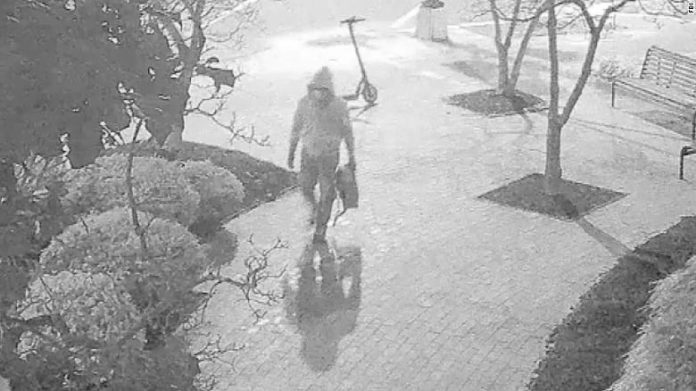 WASHINGTON – (Scroll Down For Video) – The FBI’s Washington Field Office has released new information and video regarding the suspect who placed pipe bombs in the Capitol Hill neighborhood of Washington, D.C., in January 2021, and is seeking additional tips from the public. Identifying the perpetrator of this attempted attack remains a priority for the FBI’s Washington Field Office and our partners at the Bureau of Alcohol, Tobacco, Firearms and Explosives; U.S. Capitol Police; and D.C. Metropolitan Police Department.

The new information includes a virtual map that highlights the route the suspect walked while placing the two bombs on Tuesday, January 5, between approximately 7:30 p.m. and 8:30 p.m.—the night before the riots at the U.S. Capitol. One device was placed in an alley behind the Republican National Committee (RNC) Headquarters, located at 310 First Street SE, and the other was placed next to a park bench near the Democratic National Committee (DNC) Headquarters, located at 430 South Capitol Street SE, #3.

New video footage released Wednesday shows the pipe bomb suspect sitting on the bench near the DNC, in the area where the suspect later placed the pipe bomb. From this vantage point, a full front view of the suspect can be observed.

Based upon the suspect’s route of travel to the DNC and from the DNC to the RNC, and the manner in which the suspect carries the backpack after placing the pipe bomb at the DNC, the FBI believes the suspect had a location in the vicinity of Folger Park from which the person was operating. Reviews of the suspect’s behavior in video footage and interviews with residents in the Capitol Hill neighborhood have led the FBI to believe the suspect is not from the area.

In light of this new information, the FBI is issuing a national call for tips from the American people, who have been tremendously helpful to date in providing information to further this investigation. The FBI is asking the public to view the virtual map and watch the new video of the suspect and come forward with any information you recognize or remember about this person’s glasses, shoes, backpack, or any of the items, mannerisms, and characteristics in the photos and videos the FBI has released. Anyone who may have seen the suspect or anything unusual in Folger Park the evening of January 5 is also asked to call the FBI.

“The FBI is extremely grateful to the American people who have already provided us with vital assistance in this case,” said Steven M. D’Antuono, assistant director in charge of the FBI’s Washington Field Office. “Since January, the FBI has conducted more than 800 interviews, collected more than 23,000 video files, and assessed more than 300 tips related to this investigation. Those tips have helped us uncover new information, which we are releasing today and asking the public to view it and call us with any information you think may be relevant.

“We know it is hard to report information about a friend or family member, but these pipe bombs were viable devices that could have detonated, causing innocent bystanders to be seriously injured or killed. Your tip could be the one that prevents this person from harming themselves or anyone else,” D’Antuono emphasized.

The person who placed these bombs wore a face mask, glasses, a grey hooded sweatshirt, gloves, and black and light grey Nike Air Max Speed Turf shoes with a yellow logo. The suspect used a backpack to transport each of the devices.

Together with the ATF, the FBI is offering a $100,000 reward for information leading to the identification of the person who placed these devices on the night of January 5, 2021. If you have any information, please call the FBI at 1-800-CALL-FBI, or you can submit online at tips.fbi.gov. Tips can remain anonymous.