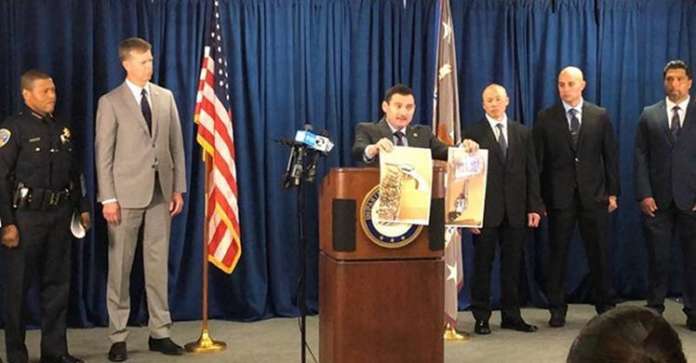 During the arrests, HSI special agents recovered two handguns with ammunition. They also recovered a machete, which is known as a weapon of choice for MS-13 gang members.

The investigation led to 17 Bay Area residents being indicted by a federal grand jury for a broad range of racketeering crimes including RICO conspiracy, attempted murder, and assault. The superseding indictment handed down Feb. 18 and unsealed today catalogues a litany of crimes allegedly perpetrated in and around the Mission District of San Francisco, according to U.S. Attorney David L. Anderson.

“San Francisco continues to suffer from gang violence and gang claims on our public spaces,” said Anderson. “I am grateful to the men and women of Homeland Security Investigations and the San Francisco Police Department for their professionalism and teamwork as we oppose gang activity with skillful law enforcement and vigorous prosecutions. San Francisco is safer when we all work together.”

According to the indictment, the defendants are members of the MS-13 transnational criminal organization. MS-13 has over 10,000 members regularly conducting gang activities in at least 20 states and the District of Columbia, as well as in other nations, including Mexico, Honduras, Guatemala and El Salvador. In the United States, MS-13 is one of the largest street gangs. It has been active in this country since the 1980s, when it originated in Los Angeles, California. Since then, MS-13 has spread to other cities in California, including San Francisco, Santa Cruz, Richmond, and Daly City. MS-13 has also spread across the country to other states, including Virginia, Maryland, New York, Tennessee, North Carolina and Texas. The superseding indictment describes how the 20th Street clique of MS-13 relies on crime to operate, including to avoid detection by law enforcement, to initiate new recruits, to enhance the reputation of the gang and individual gang members, to maintain control of drug distribution channels, and to intimidate people who might testify against or otherwise defy the gang.

In this case, the superseding indictment alleges 14 of the defendants conspired to engage in racketeering for the purpose of preserving the power, territory, reputation, and profits of the local MS-13 clique, known as MS-13 20th Street. The indictment describes how MS-13 20th Street members bear tattoos, wear certain colors, and display gang signs to demonstrate allegiance to the clique. Also described in the superseding indictment is how the gang seeks to maintain control of drug “turf” by relying on robbery, extortion, and other violent crimes, including stabbings and shootings. To see a surveillance video of these MS-13 gang members committing one of their violent acts against restaurant workers (described in Paragraph 26 of the indictment), go to: https://youtu.be/waUtxpqZEGM

Listed in the superseding indictment are dates on which particular defendants allegedly committed crimes to further the purposes of the gang. For example, the indictment alleges that on Sept. 16, 2016, defendants Alexis Cruz Zepeda, a.k.a. Zorro, and Kevin Reyes Melendez, a.k.a. Neutron, fired shots at a suspected gang rival. Cruz Zepeda and Reyes Melendez then fled the scene in a vehicle allegedly driven by Ronaldy Dominguez, a.k.a. “Smokey,” who, after a high-speed chase, evaded police by driving the wrong way down the Vermont Street off-ramp of Highway 101. The victim suffered five gunshot entry and exit wounds but survived. Similarly, the superseding indictment alleges that on Nov. 26, 2017, when MS-13 gang members attempted to extort cash and drugs from street dealers, defendant Elmer Rodriguez, a.k.a. Gordo, shot a victim in the chest at close range with a 12-gauge shotgun.

In all, the superseding indictment charges 10 crimes of violence allegedly perpetrated by the defendants. The charges pending against each defendant are as follows:

An indictment merely alleges that crimes have been committed, and the defendants are presumed innocent until proven guilty beyond a reasonable doubt.