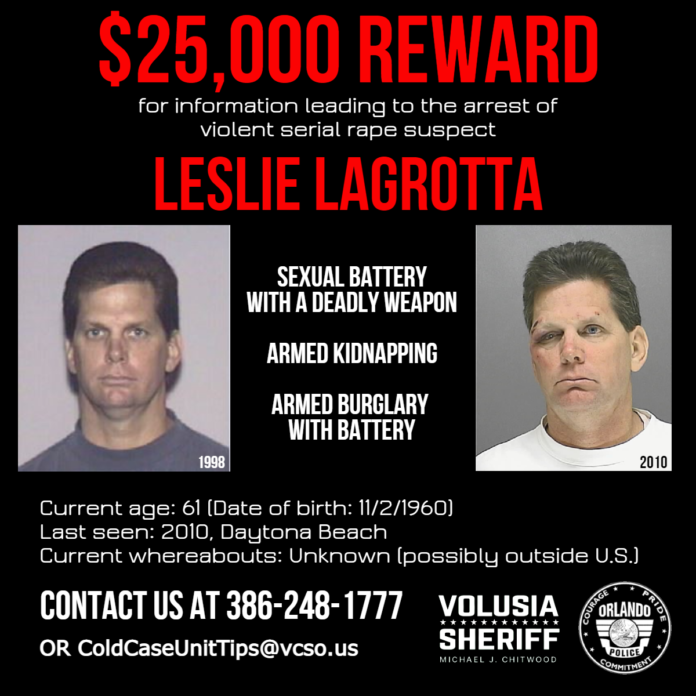 FLRODA – Volusia County Sheriff Mike Chitwood announced Thursday that the Volusia Sheriff’s Office will pay a $25,000 reward for information leading to the arrest of violent serial rape suspect Leslie Lagrotta, who is wanted in a series of sexual batteries in Orlando and Volusia County from 1988 to 1998.

Sheriff Chitwood joined Orlando Police Department Chief Orlando Rolón on Thursday afternoon to announce Lagrotta as the suspect in the decades-old rape cases, which occurred in Orlando in 1988 and 1989, in Volusia Sheriff’s Office jurisdiction in 1992, 1993 and 1998, and in the city of Daytona Beach in 1997.

DNA evidence has linked Lagrotta to each attack.

“Pick up the phone, let us know where he’s at, so we can work with OPD and bring this scumbag to justice,” Sheriff Chitwood said in the news conference at Orlando Police Department headquarters on Thursday. “We owe it to these women.”

“You’re looking at a predator,” Chitwood added. “You’re looking at a guy who stole from these women. He stole their sense of self-being when he committed these horrible, horrible acts, and then, like the coward and the scumbag that he is, he’s disappeared.”

“The last thing he told one of his relatives is ‘The police are going to get my DNA. I need to leave town. I’m going to go to prison,’” Orlando police Detective Michael Fields said.