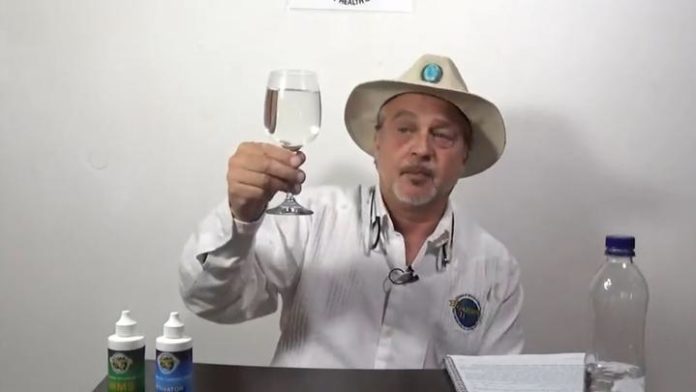 Jonathan and Jordan Grenon were arrested last summer on related charges based on a criminal complaint filed by Miami federal prosecutors.

According to the indictment, the Grenons, all of Bradenton, Florida, manufactured, promoted, and sold a product they named Miracle Mineral Solution (“MMS”). MMS is a chemical solution containing sodium chlorite and water which, when ingested orally, became chlorine dioxide, a powerful bleach typically used for industrial water treatment or bleaching textiles, pulp, and paper. The Grenons claimed that ingesting MMS could treat, prevent, and cure COVID-19, according to the charges. The FDA, however, had not approved MMS for treatment of COVID-19, or for any other use. Rather, in prior official warning statements, the FDA had strongly urged consumers not to purchase or use MMS for any reason, explaining that drinking MMS was the same as drinking bleach and could cause dangerous side effects, including severe vomiting, diarrhea, and life-threatening low blood pressure. See https://www.fda.gov/consumers/consumer-updates/danger-dont-drink-miracle-mineral-solution-or-similar-products. In fact, FDA received reports of people requiring hospitalizations, developing life-threatening conditions, and even dying after drinking MMS.

The indictment further alleges that before marketing MMS as a cure for COVID-19, the Grenons marketed MMS as a miracle cure-all for dozens of other serious diseases and disorders, even though the FDA had not approved MMS for any use. The Grenons sold tens of thousands of bottles of MMS nationwide, including to consumers throughout South Florida, according to the allegations. They sold this dangerous product under the guise of Genesis II Church of Health and Healing (“Genesis”), an entity they are accused of creating to avoid government regulation of MMS and shield themselves from prosecution. According to charging documents, Genesis’ own websites describe Genesis as a “non-religious church,” and Defendant Mark Grenon, the co-founder of Genesis, has repeatedly acknowledged that Genesis “has nothing to do with religion,” and that he founded Genesis to “legalize the use of MMS” and avoid “going [ ] to jail.” The Genesis websites further stated that MMS could be acquired only through a “donation” to Genesis, but the donation amounts for MMS orders were set at specific dollar amounts, and were mandatory, such that the donation amounts were effectively just sales prices. The indictment alleges that the Grenons received more than $1 million from selling MMS.

Furthermore, according to statements made in court by federal prosecutors in Miami, a search warrant was executed for Defendant Jonathan Grenon’s house at the time of his arrest, and officers discovered that the Grenons were manufacturing MMS in a shed in Jonathan Grenon’s backyard in Bradenton, Florida. Officers seized dozens of blue chemical drums containing nearly 10,000 pounds of sodium chlorite powder, thousands of bottles of MMS, and other items used in the manufacture and distribution of MMS. The government also recovered multiple loaded firearms, including one pump-action shotgun concealed in a custom-made violin case to disguise its appearance, according to prosecutors.

The indictment charges each of the Grenons with one count of conspiracy to commit fraud and two counts of criminal contempt. If convicted, the Grenons face up to life imprisonment. A federal district judge will determine any sentence after considering the U.S. Sentencing Guidelines and other statutory factors.