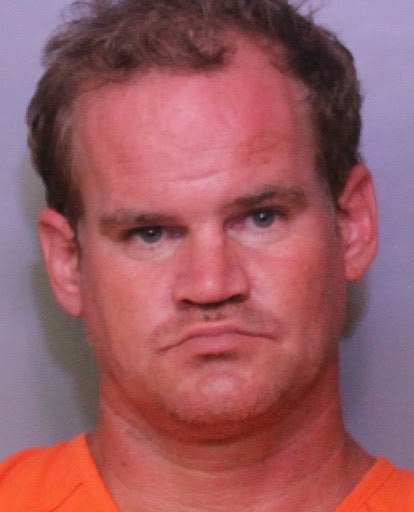 On Wednesday, Polk County detectives arrested 42-year-old Arne Jensen Jr. of Avon Park on charges of “traveling to meet a minor for sex, 3-counts of transmitting harmful material to a minor, and attempted sexual battery” — all felonies.

According to the affidavit, as summarized by the Polk County Sheriff’s Office: The reportee, an adult female, posted items for sale on Facebook Marketplace. She was then contacted through a private message by a person she did not know, who turned out to be Jensen. Jensen was using a female Facebook profile name. Through the private message, Jensen asked the reportee “Can you meet me at the boat ramp…and I will have my zipper down and have it sticking out…” It was clear to the reportee from the initial online conversation that Jensen was not the female he was posing as on Facebook.

The reportee went to the Facebook page of the profile Jensen was using and discovered a post stating:

“I told everyone in my Facebook page about being hacked. I don’t know if anyone is still getting the nasty messages if you are delete me from your friend.”

The reportee contacted the Sheriff’s Office to report the sexually explicit language and photos sent to her. A PCSO detective took over the online conversation with Jensen, assuming the role of a 16-year-old girl. The detective made it very clear that Jensen knew and understood that the person he was communicating with was a 16-year-old girl. Jensen continued making sexually explicit comments and continued sending nude photos to someone he thought was a 16-year-old girl. In one of the photos he sent, his face was clearly seen. The detective compared it to Jensen’s driver’s license photo and it matched. Detectives agreed to meet Jensen at his request at the Lake Streety Road boat ramp in unincorporated Frostproof. Jensen was taken into custody and arrested without incident.

Jensen’s cell phone was seized. A forensic search on the device will be completed to determine if there are any other victims. This investigation remains on-going.

“This man is a sexual predator and a creep. According to his criminal history, this isn’t the first time he’s attempted something like this. Fortunately, the reportee recognized the danger and helped our detectives catch this predator before he could hurt a child.” – Grady Judd, Sheriff

Jensen is currently unemployed, and receives a $602.00 disability check and $204.00 in food stamps monthly. His criminal history includes 7 felonies and 13 misdemeanors, with charges for trespassing, grand theft, petit theft, driving on a suspended license, loitering and prowling, disorderly conduct, stalking, indecent exposure, and lewd and lascivious behavior. Following his first appearance hearing today, Jensen is in the Polk County Jail with a $105,000 bond.