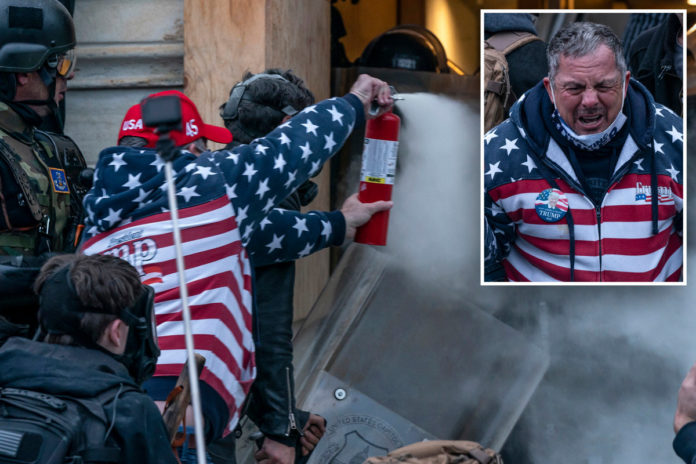 WASHINGTON – (DOJ) – A Florida man pleaded guilty today to ‘assaulting law enforcement with dangerous weapons’ during the breach of the U.S. Capitol on Jan. 6.

According to court documents, Robert Scott Palmer, 54, of Largo, was among rioters outside the U.S. Capitol on the afternoon of Jan. 6. At approximately 4:53 p.m., he was standing near the archway leading from the lower west terrace to the interior of the Capitol. While there, he threw a wooden plank at U.S. Capitol Police (USCP) and Metropolitan Police Department (MPD) officers protecting the lower west terrace entrance. Approximately two minutes later, he was at the front line of rioters confronting the officers located within the lower west terrace archway. At this time, Palmer sprayed the contents of a fire extinguisher at the officers until it was empty. He then threw the fire extinguisher at the officers.

Although no specific injury was tied to this conduct, based on the size and weight of the plank and fire extinguisher, and the speed and force with which Palmer threw them, the objects were capable of inflicting serious bodily injury.

Palmer was arrested in Florida on March 17, and is scheduled to be sentenced on Dec. 17 at 12:30 p.m. He faces a statutory maximum penalty of up to 20 years in prison and a $250,000 fine for assaulting, resisting, or impeding officers using a dangerous weapon. A federal district court judge will determine any sentence after considering the U.S. Sentencing Guidelines and other statutory factors.