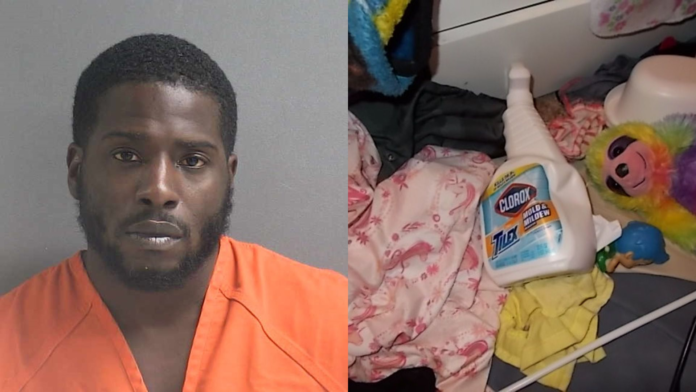 FLORIDA – An Ormond Beach man is behind bars on child abuse and attempted arson charges after abusing a sleeping 4-year-old, spraying him in the face with bleach, soaking a bedroom of the home in tiki torch fuel and driving drunk with an infant and toddler unsecured in the car.

Mack Arline, 31, was arrested Saturday morning after deputies responded to the home on Avenue E in Ormond Beach on a request from the Daytona Beach Police Department. A Daytona Beach officer had been flagged down by the mother of three children who showed a video clip of Arline pouring fuel around their home and spraying the 4-year-old in the face with Clorox. The woman told the officer that Arline was heavily intoxicated and threatening to burn down the house and kill their children.

When deputies arrived, they found Arline backing out of the driveway with two children in the vehicle. An 11-month-old baby wearing only a diaper was lying on Arline’s chest in front of the steering wheel, and a 2-year-old child was in the front passenger seat, unrestrained. Deputies took the children to safety and detained Arline, who smelled of alcohol and was not completely coherent.

Deputies then checked on the 4-year-old still inside the house, and found him sleeping on a bedroom floor, with a Clorox spray bottle near him. In another bedroom, deputies found an empty bottle of tiki torch fuel on the bed, which was wet, as was the furniture.

On closer review of the video that prompted the well-being check, deputies watched Arline kick a plastic toy car into the 4-year-old as he slept, then spraying him and telling him to wake up while using profanity and a racial slur. After the toy car hit the child, he pulled a blanket over his head to cover his face. A second video showed Arline emptying the bottle of fuel on the bed, furniture and carpet of the master bedroom.

Deputies also found a bottle of Grey Goose vodka on the passenger floorboard of the vehicle, with the cork on the driver’s floorboard, and a plastic cup in the driver’s cup holder that smelled of alcohol.

Arline was intoxicated to the point that he had to be picked up and placed in a patrol car before he was transported to the Volusia County Branch Jail on charges of aggravated child abuse, child abuse, attempted arson, DUI, and driving with a suspended or revoked license. A state probation officer who was in the area doing probation checks at the time also advised Arline violated his probation on a previous charge of false imprisonment. Arline was also on inmate release status for fleeing or attempting to elude law enforcement. On Sunday, he remained held without bond at the Branch Jail.