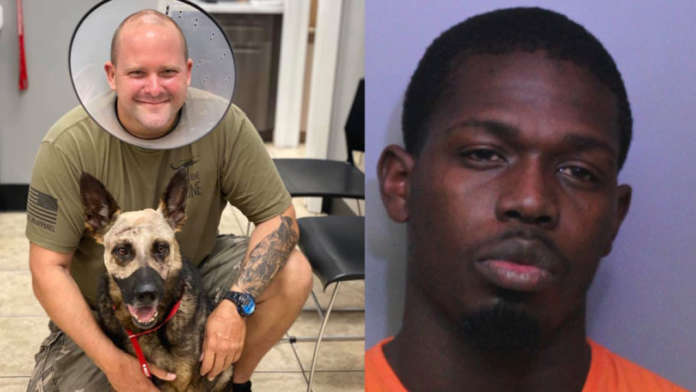 On Saturday evening, March 28, 2020, PCSO deputies responded to an armed burglary in progress on Grand Pines Blvd in Lakeland, during which the suspect broke into an occupied home armed with a tire lug wrench.

Around 8:30 p.m., the two victims were startled by the suspect banging on their door, yelling, “Let me in!” and “They are after me!” The suspect appeared frantic, however, the victims didn’t see anyone else outside. After refusing to let him in, the suspect broke the glass on the door with the tire lug wrench, and forced his way inside. The victims ran outside and dialed 911.

Deputies arrived on-scene, including a PCSO canine team – Deputy Sheriff Scott Cronin and his K-9 partner, Vise. The suspect – 31-year-old Carl McHargh, Jr. – was inside the master bathroom closet, refusing to come out. Three deputies went in and found McHargh barricaded inside the closet adjacent to the master bath. At that time, deputies knew him only to be armed with the lug wrench.

Deputies pried the closet door open as McHargh refused to surrender, and K-9 Vise went into the closet to apprehend McHargh. Deputy Cronin observed McHargh punching K-9 Vise about his head and neck. Cronin grabbed the suspect’s hand, and realized he was actually stabbing the dog with a kitchen knife that McHargh grabbed from the victims’ kitchen. Cronin wrenched the knife out of McHargh’s hand as he continued to violently resist the deputy’s efforts to take him into custody, and Cronin was cut in the process.

The three deputies were able to pull McHargh away from the dog and place him in handcuffs. Deputy Cronin then ran Vise out to his patrol car and transported him in emergency mode due to his significant injuries to Parkway Veterinary Emergency Clinic in Lakeland, where he underwent surgery for his 9 stab wounds and arterial bleed, and received numerous stitches. Vise was admitted to the emergency vet hospital overnight. He is expected to make a full recovery. Deputy Cronin received a laceration to his hand from wrestling the knife out of the suspect’s hand. He was treated and released from LRHMC.

Sheriff Grady Judd said, “These deputies and the canine risked their lives to get an armed and dangerous, drug-induced suspect out of the victims’ house. We are grateful that Vise will make a full recovery and that Deputy Cronin and the other two deputies weren’t more seriously injured in this violent attack. This felon was clearly in some sort of drug-induced rage, and preliminarily it appears he was suffering from excited delirium.”

After McHargh was taken into custody, he suffered a significant medical event suspected to be excited delirium from his cocaine-induced state, and he was treated at the scene by EMS, including the administration of Narcan and CPR. They revived him and transported him to a local hospital, where he tested positive for cocaine, and was intubated.

If McHargh had survived this drug-intoxicated event, he would have been charged with:
-Armed occupied burglary
-Offense against a police dog with great bodily harm
-3 counts resisting arrest with violence
-3 counts battery on a law enforcement officer
-Petit theft

His extensive criminal history included 15 felonies, 11 misdemeanors, and one trip to state prison for attempted armed robbery. His 36 previous arrests in Polk and Hillsborough counties were for robbery, battery, battery domestic violence, burglary, grand theft of a motor vehicle, resisting arrest, assault, cocaine possession, marijuana possession, keeping a structure for drug use, possession of paraphernalia, failure to appear, and VOP. His most recent arrest in Polk was for battery domestic violence in January 2019 (his mugshot above is from that arrest).