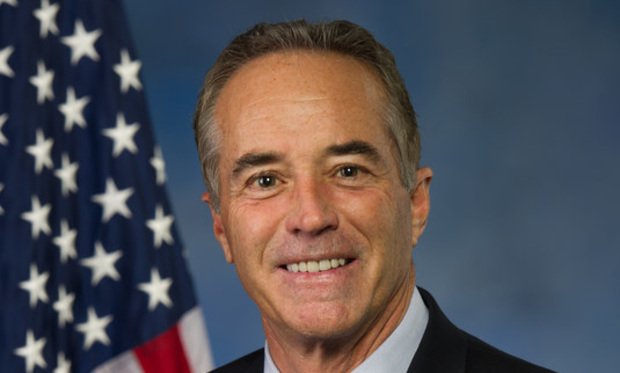 Chris Collins, who represented the 27th District of New York as a member of the U.S. House of Representatives, as a republican, was sentenced to 26 months in prison by U.S. District Judge Vernon S. Broderick for participating in a scheme to commit insider trading and for making false statements to federal law enforcement agents when interviewed about his conduct.

U.S. Attorney Geoffrey S. Berman said:  “Former New York Congressman and Innate board member Christopher Collins received confidential, nonpublic information that one of Innate’s drugs in development had just failed a clinical trial.  Moments later, from the White House lawn, Collins notified his son Cameron, so that he could trade the stock ahead of the public announcement and avoid taking a substantial loss on the stock.  He then lied to the FBI when asked about his conduct.  Collins’s greed and disregard for the law have now led to a criminal conviction for insider trading and lying to the FBI, his resignation from Congress, and over two years in federal prison.  Lawmakers bear the profound privilege and responsibility of writing and passing laws, but equally as important, the absolute obligation of following them.  Collins’s hubris is a stark reminder that the people of New York can and should demand more from their elected officials, and that no matter how powerful, no lawmaker is above the law.”

The following facts are based on the allegations contained in the Superseding Indictment and statements made in related court filings and proceedings:

In or about June 2017, Collins, who, in addition to serving on the board of directors of Innate Immunotherapeutics (“Innate”), an Australian biotechnology company, was also one of Innate’s largest shareholders, participated in a scheme to commit insider trading.  Specifically, on or about June 22, 2017, Collins learned that MIS416 – a multiple sclerosis drug that Innate was developing – had failed a critical drug trial that was meant to determine the drug’s clinical efficacy (the “Drug Trial”).  The negative Drug Trial results were highly confidential, and, as an insider who owed duties of trust and confidence to Innate, Collins was obligated to keep the Drug Trial results secret until Innate publicly released them.  Instead, in breach of those duties, Collins tipped his son, Cameron Collins, who was also a substantial Innate shareholder, so that Cameron Collins could make timely trades and tip others before Innate publicly released the Drug Trial results.  Cameron Collins traded on the inside information and passed it to Stephen Zarsky, the father of his fiancée, as well as to three individuals not named in the Superseding Indictment (“Individual-1,” “Individual-2,” and “Individual-6”), so that they could utilize the information for the same purpose.  Zarsky, in turn, traded on the information and used it to tip three more individuals not named in the Superseding Indictment (“Individual-3,” “Individual-4,” and “Individual-5,”) so that they too could engage in timely trades in Innate stock.  All of the trades preceded the public release of the negative Drug Trial results.

In total, these trades allowed Cameron Collins and Zarsky, and Individual-1 through Individual-6, to avoid over $768,000 in losses that they would have otherwise incurred if they had sold their stock in Innate after the Drug Trial results became public.

In or about October 2014, Innate initiated a Phase 2B clinical trial of its primary drug, MIS416.  Successful completion of the Drug Trial was a necessary prerequisite to the commercialization of MIS416.  Because Innate had no other significant products in development, its stock price was tied to the success of MIS416.

The Drug Trial was widely expected to be completed around the summer of 2017.  For example, on or about June 9, 2017, Innate’s chief executive officer (“CEO”) sent various individuals, including Collins, an email stating that “the delivery date for [the] review and ‘verdict’” of the Drug Trial “will [] occur at COB on US Thursday June 22nd.”  As the summer progressed, individuals within Innate remained optimistic that MIS416’s Drug Trial results would be positive.  The initial Drug Trial results were made available by trial administrators to Innate’s CEO on June 22, 2017.  These results established that MIS416 lacked therapeutic value in the treatment of multiple sclerosis.  The results were not publicly released at that time.  Instead, they were released publicly on June 26, 2017, after the U.S. markets had closed (the “Public Announcement”).  Innate’s stock price subsequently crashed, dropping 92% on the first trading day following the Public Announcement.

Dissemination of the Drug Trial Results

On or about June 22, 2017, at approximately 6:55 p.m., Innate’s CEO sent an email describing the Drug Trial results to the company’s board of directors, including Collins.  The email explained to Innate’s board of directors for the first time that the Drug Trial had been a failure.  The email began, in part, “I have bad news to report,” and continued to explain that “the top line analysis of the ‘intent to treat’ patient population (ie every subject who was successfully enrolled in the study) would pretty clearly indicate[s] ‘clinical failure.’”  The email continued, “Top-line 12-month data . . . show no clinically meaningful or statistically significant differences in [outcomes] between MIS416 and placebo,” and concluded by stating, “No doubt we will want to consider this extremely bad news . . . .”

At the time Collins received this email, he was attending the Congressional Picnic at the White House.  At 7:10 p.m., Collins replied to the email, stating, in part, “Wow.  Makes no sense.  How are these results even possible???”  After responding to the Innate CEO’s email, Collins called his son, Cameron Collins.  They traded six missed calls between 7:11 p.m. and 7:15 p.m.  At 7:16 p.m., Collins and Cameron Collins spoke for more than six minutes.  During that six-minute phone call, Collins told Cameron Collins, in sum and substance, that MIS416 had failed the Drug Trial.

Trading and Tipping by CAMERON COLLINS and ZARSKY

Furthermore, after learning the Drug Trial results from Collins, on or about the night of June 22, 2017, Cameron Collins provided the Drug Trial results to at least the following three sets of individuals so that they could trade in advance of the Public Announcement:  (1) his fiancée, Individual-1; (2) Zarsky and Zarsky’s wife, Individual-2; and (3) Cameron Collins’s friend, Individual-6.  Collectively, these individuals avoided approximately $186,620 in losses as a result of their trading on inside information.

On or about the morning of June 23, 2017, Zarsky provided the negative Drug Trial results that he had learned from Cameron Collins and Individual-1 to at least the following individuals, among others, or otherwise caused them to trade or attempt to trade in advance of the Public Announcement: (1) his brother, Individual-3; (2) his sister, Individual-4; and (3) his longstanding friend, Individual-5.  Collectively, these individuals avoided approximately $10,900 in losses as a result of their trading on inside information.

False Statements to the FBI

On or about April 25, 2018, special agents from the Federal Bureau of Investigation (“FBI”) separately interviewed Collins, Cameron Collins and Zarsky.  During these interviews, and as detailed in the Superseding Indictment, Collins, Cameron Collins and Zarsky made false statements to the FBI to cover up their participation in the insider trading scheme.

In addition to the prison term, Collins was sentenced to one year of supervised release and ordered to pay a fine of $200,000.