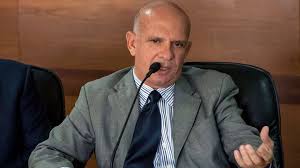 Geoffrey S. Berman, the United States Attorney for the Southern District of New York, and Christopher T. Tersigni, the Special Agent in Charge of the Special Operations Division of the U.S. Drug Enforcement Administration (“DEA”), today announced that former Venezuelan official Hugo Armando Carvajal Barrios, a/k/a “El Pollo,” was arrested today in Madrid, Spain, based on an Interpol Notice related to the charge filed in Indictment 11 Cr. 205 in the Southern District of New York. The Indictment charges Carvajal with participating in a conspiracy to import cocaine into the United States, including a 5.6-ton shipment of cocaine transported from Venezuela to Mexico in April 2006.[1] The U.S. Attorney’s Office for the Southern District of New York plans to seek the extradition of Carvajal Barrios from Spain.

Manhattan U.S. Attorney Geoffrey S. Berman said: “Hugo Armando Carvajal Barrios, a former high-ranking official of Venezuelan military intelligence, allegedly conspired with others to traffic more than five tons of cocaine into the United States since at least 2006. Barrios’s arrest exemplifies this Office’s resolve to bring those who contribute to the illicit global drug trade to justice. No matter the rank or level of influence of an individual, we will continue to pursue and prosecute those who bring deadly drugs into this country in a U.S. court of law.”

Special Agent in Charge Christopher T. Tersigni said: “Today’s arrest of Hugo Armando Carvajal Barrios is yet another example of DEA’s commitment to stemming the flow of dangerous illicit drugs into our country. Despite his status as a former government official in Venezuela, Carvajal Barrios is not above the law. The DEA is grateful to our international partners for their efforts in helping to bring this drug-trafficker to justice.

Carvajal Barrios, 56, a Venezuelan national residing in Venezuela, among other places, is charged with conspiring to import cocaine into the United States. If convicted, Carvajal Barrios faces a mandatory minimum sentence of 10 years in prison and a maximum sentence of life in prison. The mandatory minimum and maximum potential sentences in this case are prescribed by Congress and provided here for informational purposes only, as any sentencing of the defendant will be determined by a judge.