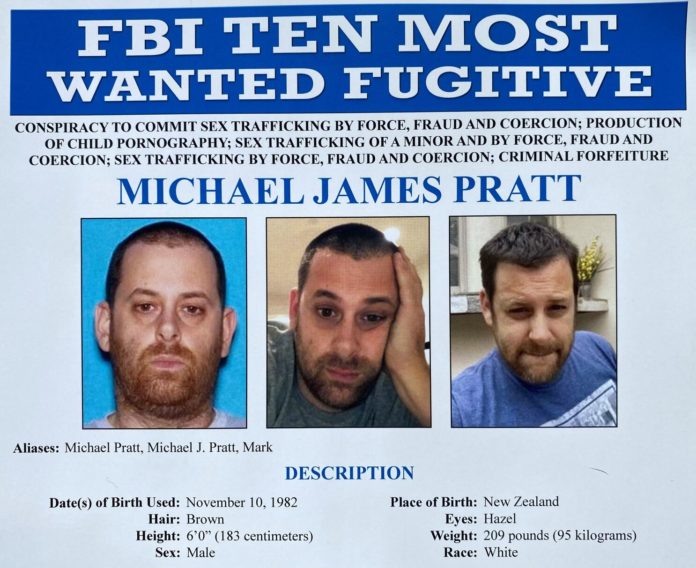 The FBI San Diego Field Office, along with the U.S. Attorney’s Office in the Southern District of California, announced the addition of Michael James Pratt to the FBI’s “Ten Most Wanted Fugitives” list for his alleged involvement in sex trafficking and production of child pornography. Pratt marks the 529th addition to the list.

The FBI is offering a reward of up to $100,000 for information leading to his arrest.

Pratt is wanted for his alleged involvement in a conspiracy to recruit young adult women and minor girls to engage in commercial sex acts by force, fraud, and coercion. From approximately 2012 to October 2019, Pratt and his co-conspirator owned and operated a pornography production company and online pornography websites named “GirlsDoPorn” and “GirlsDoToys.” Pratt’s pornography websites generated more than $17 million in revenue.

A federal arrest warrant was issued for Pratt in the U.S. District Court, Southern District of California, in November 2019.

“This was a despicable crime that has devastated its victims,” said U.S. Attorney Randy Grossman. “The U.S. Attorney’s Office is committed to combating all forms of sex trafficking. Today’s announcement is yet another important step in our commitment to bring Michael Pratt back to San Diego to face these charges and to seek justice for the victims of these crimes.”

“Locating Pratt is a high priority for the FBI in order to stop him from victimizing anyone else,” said Special Agent in Charge Stacey Moy of the FBI’s San Diego Field Office. “Michael James Pratt preyed on young women and girls and allegedly coerced or forced them through threats and fraud to participate in pornographic videos. He engages in dangerous and deceptive practices wherever he goes, and we will not waiver until justice is served.”

This remains an ongoing investigation. Those currently charged have been arrested, have pleaded guilty, been sentenced, or are awaiting sentencing. Michael Pratt remains a fugitive.

Pratt has ties to multiple countries and has the financial means to be anywhere around the world. Anyone with information on Pratt’s whereabouts is asked to call the FBI at 1-800-CALL-FBI (1-800-225-5324) or submit a tip online at tips.fbi.gov. You can remain anonymous; however, tipsters could receive a reward of up to $100,000 for information leading to Pratt’s arrest.

The FBI also believes there may be more victims who have yet to be identified, and we encourage anyone who believes they were a victim of Pratt and his co-conspirators to contact their local FBI field office or call 1-800-CALL-FBI (1-800-225-5324). Individuals located outside of the United States should contact the nearest U.S. Embassy or Consulate.