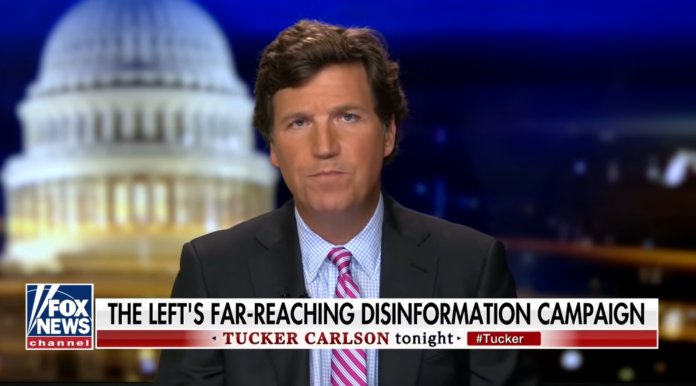 Fox News’ Tucker Carlson Tuesday night wondered why the mainstream media is “threatened by free speech” and why the MSM peddles fake news.

For example, Carlson suggested that leftists believe false statistics regarding the killing of unarmed black men by police officers. Seemingly sarcastically, he then compared that ‘disinformation’ to the falsehoods believed by QAnon supporters.

“It’s worth finding out where the public is getting all this false information, this disinformation as we’ll call it,” Tucker scoffed.

“We spent all day trying to locate the famous QAnon, which in the end we learned is not even a website,” Carlon said. “If it’s out there, we could not find it.”

“Then we checked Marjorie Taylor Greene’s Twitter feed because we have heard she traffics in disinformation, CNN told us, but nothing there! Next we called our many friends in the tight-knit intel community. Could Vladimir Putin be putting this stuff out there? The Proud Boys?! Alex Jones?! Who is lying to America in ways that are certain to make us hate each other, and certain to destroy our core institutions?”

“Maybe they are from QAnon. You be the judge,” he snarled. Adding, “CNN itself has become a disinformation network — more powerful than QAnon and far more destructive.”

Watch his monologue below.