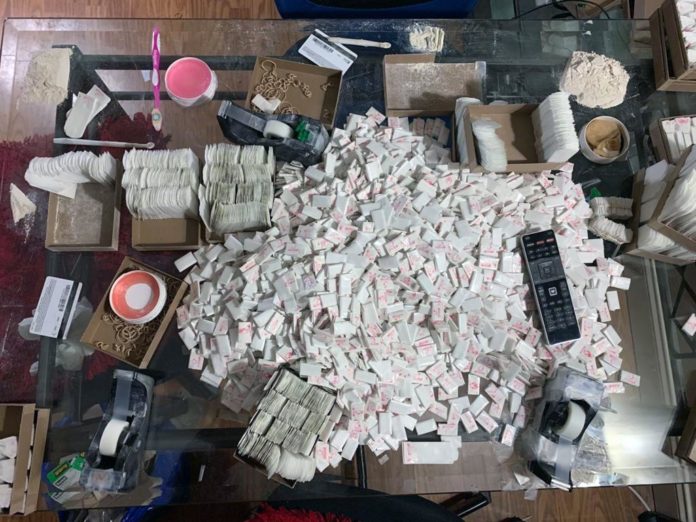 NEW YORK CITY – An accused major trafficker and three others are charged in connection with a large-scale heroin-packaging mill dismantled in Ridgewood, Queens. Approximately 39 kilograms of suspected heroin, with an estimated street value of $12 million, 1,000 fentanyl pills and $200,000 cash were recovered during the investigation, conducted by the Office of the Special Narcotics Prosecutor, DEA’s New York Drug Enforcement Task Force, Group T-21, and Homeland Security Investigations, New York.

On Monday, Feb. 8, 2021 around 4 p.m., members of NYDETF Group T-21 and SNP’s Investigators Unit were conducting surveillance as part of the short-term investigation when they observed Martinez, a suspected narcotics trafficker, exiting 63-16 Forest Avenue carrying a backpack. Agents and officers stopped Martinez as he walked down the block and found that the bag allegedly contained approximately $200,000 cash. Martinez was also carrying four cellphones and keys to 63-16 Forest Avenue.

A short time later, Members of T-21 entered 63-16 Forest Avenue and knocked on the door of Apartment 2A. In response to the knocking, Medina opened the apartment door. Inside the living room, agents and officers saw an empty heat-wrapped bag of a type used for wrapping a kilogram of narcotics. Agents and officers heard noises coming from behind a closed door. Upon opening the door, they discovered two women, Sosa De Espinal and Berroa, hiding inside a bathroom with the lights off. 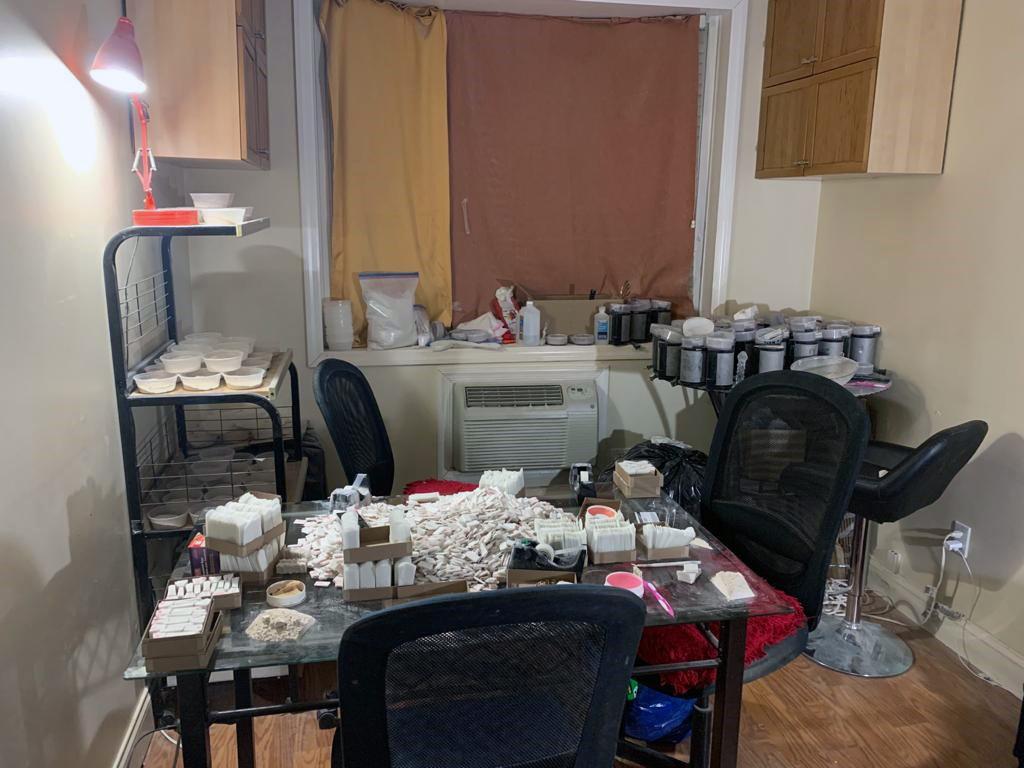 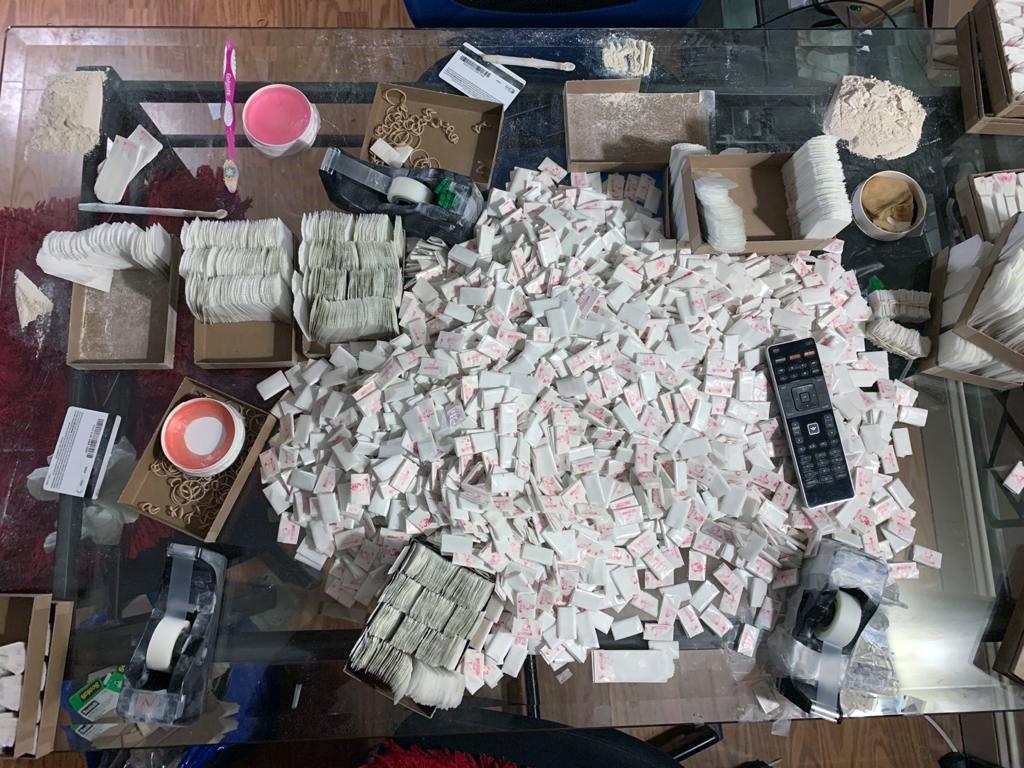 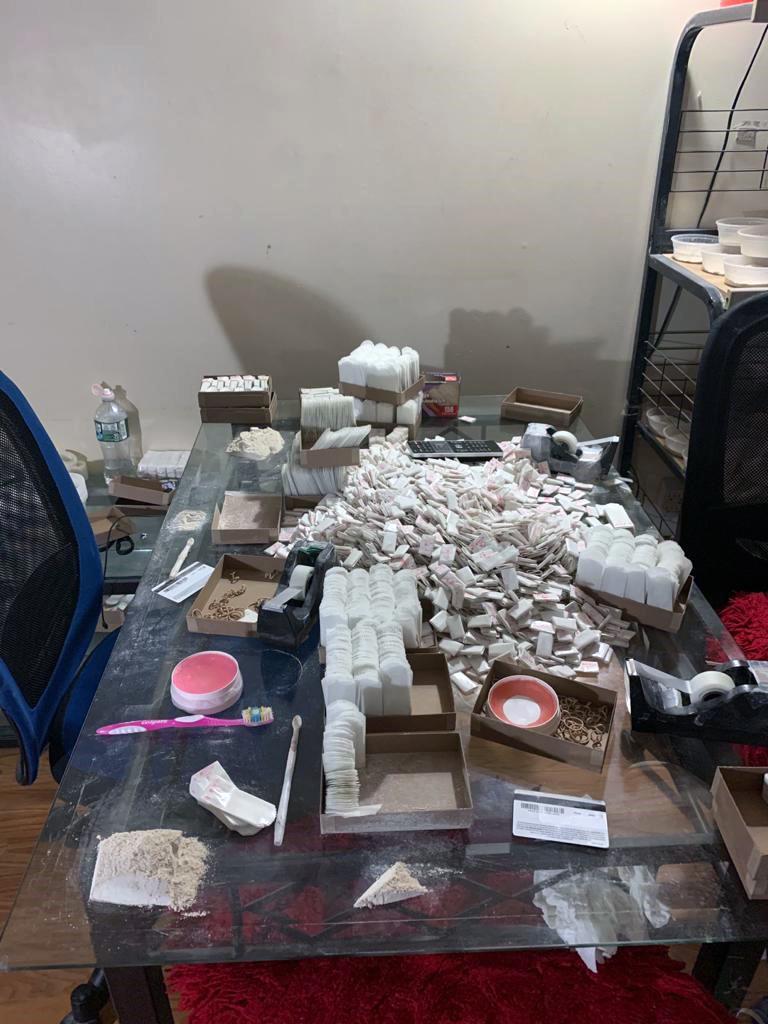 A search of the apartment revealed that one of its two bedrooms was set up for packaging heroin. Inside the bedroom, agents and officers found 31 pressed, brick shaped packages wrapped in duct tape, each allegedly containing a kilogram of heroin, and an additional six kilograms of loose powder inside plastic containers and zip-lock style bags.

A tabletop held approximately 100,000 individual dose glassine envelopes filled with heroin, as well as empty envelopes and stamps. Glassine envelopes bore various brand names, including “Red Scorpion,” “The Hulk,” “Universal,” “Hard Target,” “Last Dragon, “Dope” and “Venom.” All of the equipment necessary for processing and packaging heroin was also present in the bedroom, including digital scales, sifters and grinders. 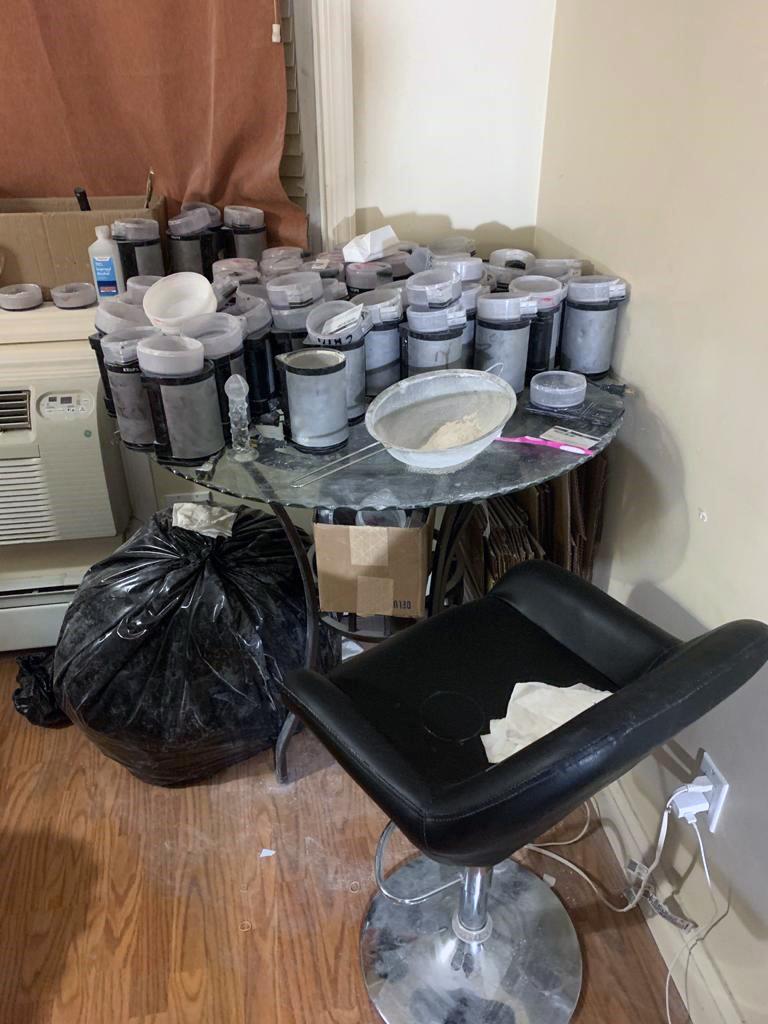 Agents and officers also seized approximately 1,000 blue pills bearing markings similar to pharmaceutically produced oxycodone, but suspected to be counterfeits containing fentanyl. More than 26 cellphones and mail addressed to Martinez were also recovered from the apartment.

The results of DEA Laboratory analysis on the narcotics in this case are pending. DEA estimates the street value of the narcotics at $12 million. 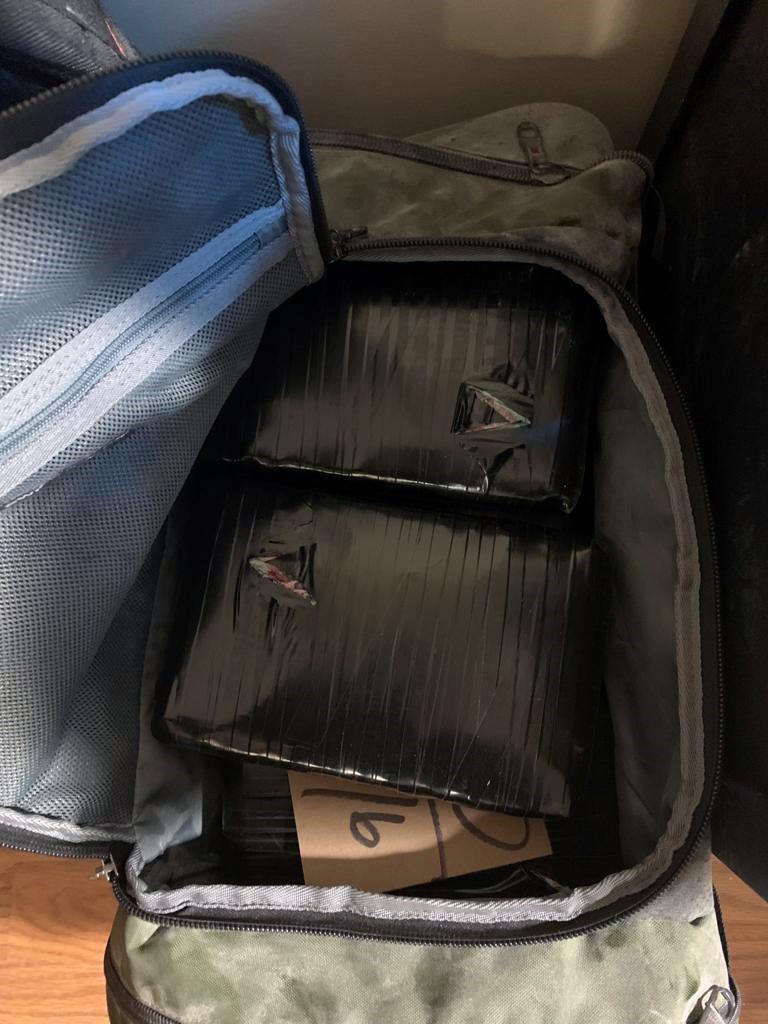 “Monday evening, we dismantled a highly sophisticated heroin mill in the heart of queens,” said DEA Special Agent in Charge Ray Donovan.  “This drug den contained nearly $12 million dollars’ worth of narcotics and was like an opioid landmine capable of dispersing hundreds of thousands of heroin doses throughout Northeast. I applaud our law enforcement partners on their quick and thorough investigation.”

“The shuttering of an assembly line able to pump out millions of street ready heroin packages and deadly counterfeit fentanyl pills will save lives across New York City and our entire region,” said Special Narcotics Prosecutor Bridget G. Brennan. “The volume of lethal drugs flooding our city is causing record number of overdose deaths. This investigation succeeded because of the expertise and cooperation of our federal and local partners.”

Queens District Attorney Melinda Katz said, “These defendants are accused of setting up a cottage industry to repackage and peddle millions of dollars’ worth of heroin, oxycodone and fentanyl. Our law enforcement partners were two steps ahead of them – and the Queens DA’s office will always work collaboratively to spoil the plans of anyone trying to put deadly, illegal drugs onto our streets.”

“This takedown will have devastating effects on this high-level opiate operation throughout the tristate area.  Not only do the seizures represent dollars lost for the organization, but more importantly, lives saved in our communities.  The partners at the New York Drug Enforcement Task Force and NYC’s Office of the Special Narcotics Prosecutor continue to demonstrate solid collaboration with their investigative and operational expertise in dismantling complex narcotics trafficking organizations,” said Peter C. Fitzhugh, Special Agent in Charge of HSI New York.

“Anyone who deals in illegal narcotics should understand that the nation’s best investigators will stop at nothing to fight crime and keep safe all the people we serve. I thank and commend the NYPD investigators involved in this case, and our many law enforcement partners whose hard work resulted in this significant seizure of narcotics. Together with all of our law-enforcement partners, we are relentlessly working to rid our city of illegal drugs, and bring those who would seek to profit from their proliferation to justice,” said Police Commissioner Dermot Shea.

Acting New York State Police Superintendent Kevin P. Bruen said, “I applaud the collaborative work of our law enforcement partners at all levels for their relentless efforts to keep illegal drugs off our streets. These charges and the seizure of these lethal drugs are the result of a commitment to aggressively target and pursue criminals who distribute these dangerous narcotics. Together, we will continue to work to prevent the flow of these illegal drugs into our communities before they threaten the safety and security of our neighborhoods.”