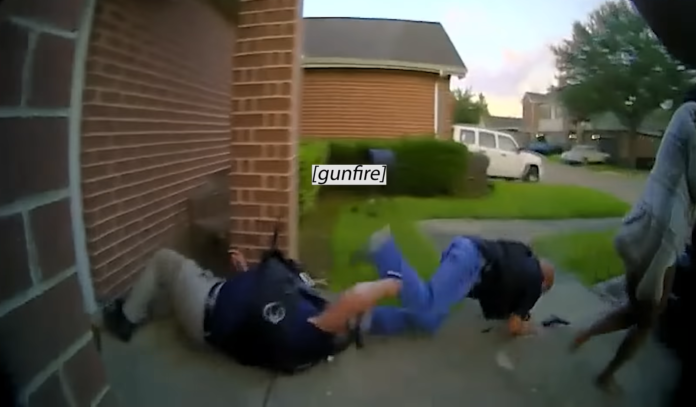 TEXAS – Houston Police Chief Troy Finner released body worn camera videos in the September 20 shooting of two HPD officers. Leaders also discussed concerns with the type of weapon that was used by the suspect in the shooting.

The shooting left Senior Officer William “Bill” Jeffrey dead and another officer, Sgt. Michael Vance, wounded. They were attempting to arrest a man on drug charges in northeast Harris County.

The suspect, Deon Ledet, 31, was also killed in the gunfight. ATF Special Agent Fred Milanowski said Ledet was using a handgun with an auto-switch – which means he can fire his semi-automatic pistol at a rapid-fire rate.

The auto switch devices allow for shooting 30 round magazine in 2.6 seconds.

They are illegal. It turns handgun into a machine gun.

“There’s absolutely no reason and no room for our suspects to be armed like this,” Finner said. “And we need to do everything we can do . . . It’s going to take everybody. This is a threat that is here and it’s a threat to everybody — law enforcement and citizens and everyone in our community.”

“ATF has had seven investigations in Houston arresting people, all of them selling auto switches. We seized about 104 of these auto switches and seized 11 guns that had auto switches already attached to them,” Milanowski said.