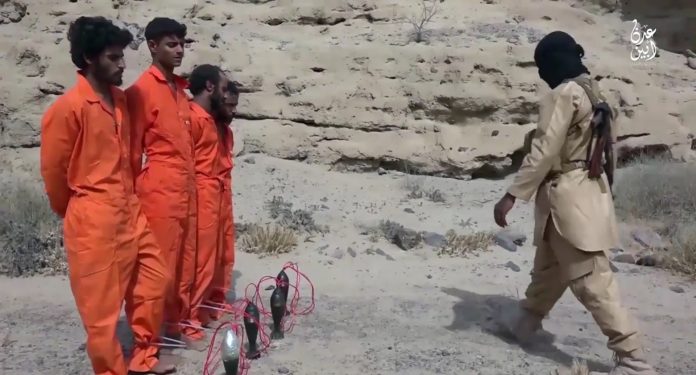 WATCH: (Scroll Down For Video) ISIS have now released a series of execution videos from war-torn Yemen.

In another of the group’s gruesome propaganda videos, a group of men are led single file onto a boat which is then pushed out to sea.

As they sit there, shackled and helpless, the boat and the men on board are blown up remotely.

Six men were blown up by a rocket launcher, another six were put on a boat which was sent out to sea and exploded, four were obliterated by the mortar shells hung around their necks and nine were beheaded with sharp daggers.

In one video, four men in orange jumpsuits stand with mortar shells tied around their necks like lanyards.

A deafening blast then sends huge amounts of soil and rock into the air. As the dust settles, the men’s destroyed, charred bodies can be made seen.

Six men were killed when a remotely triggered rocket launcher fired a grenade at them, as they sate on the side of a rocky hill.

Nine more were led to a deserted outpost somewhere in Yemen, their hands tied behind their backs, and beheaded by masked ISIS fanatics.

[Editor’s Note: Breaking911.com chooses to give it’s readers access to all available content as it relates to breaking news and major world events, this includes propaganda videos. Watch at your own risk.]