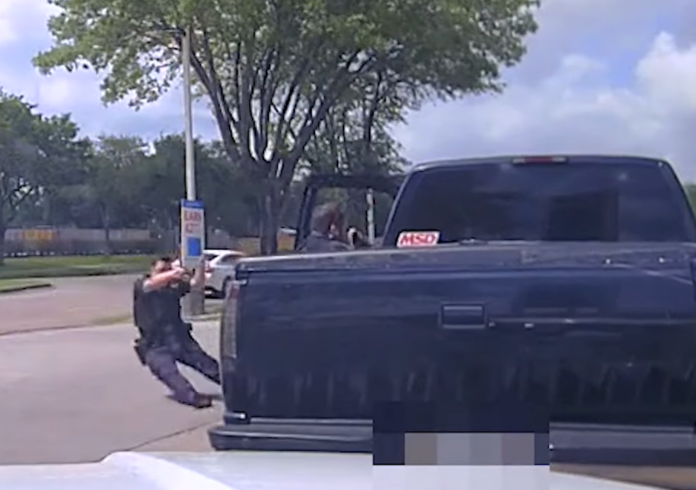 HOUSTON, Texas (HPD) – Charges have been filed against a suspect arrested in the shooting of an HPD officer at 14300 Gulf Freeway (South Interstate Highway 45) about 11:20 a.m. on Wednesday (May 4).

The suspect, Jimmy Bryan, 23, is charged with two counts of aggravated assault of a public servant in the 338th State District Court. A booking photo of Bryan, who remains hospitalized, is not releasable at this time, pending further investigation.

HPD Officer J. Sallee, who discharged his duty weapon, suffered a gunshot wound to the lower pelvic area and was transported to Memorial Hermann Southeast Hospital in stable condition. Officer M. McMurtry, who also discharged his duty weapon, was not injured in this incident. Both were sworn in as HPD officers in June 2012 and are assigned to the Traffic Enforcement Division.

Members of the HPD Narcotics Division were conducting a multi-agency narcotics investigation in the area of the above address. As part of the investigation, officers with the HPD Highway Interdiction Unit conducted a traffic stop on a vehicle, driven by Bryan, who stopped at a gas station at the above address. Officers approached the vehicle, made contact with the driver and asked him to exit the vehicle. The suspect (Bryan) then produced a weapon and fired several shots at the officers. Officer Sallee was struck at this time. Fearing for their lives, Officers Sallee and McMurtry discharged their duty weapons, striking the suspect. Officer Sallee was transported by private vehicle to the hospital. Houston Fire Department paramedics transported the suspect to an area hospital in stable condition.

As is customary in HPD officer-involved shooting incidents in the city limits, this case is being investigated by the HPD Special Investigations Unit, the Internal Affairs Division and the Harris County District Attorney’s Office.