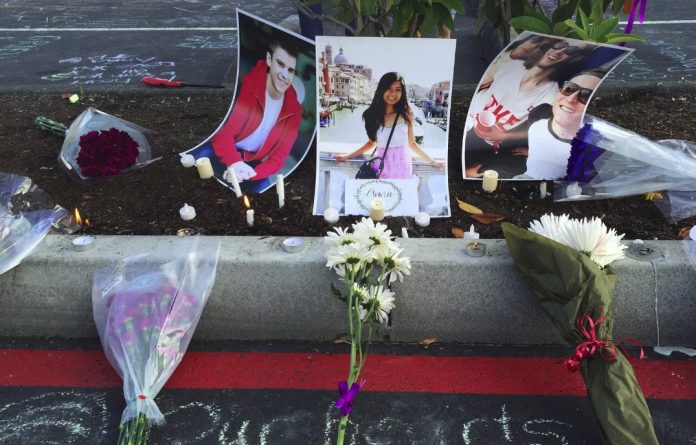 On Sunday, hundreds gathered at the Mukilteo Church of Jesus Christ Latter Day Saints to mourn the early deaths of three 19-year-olds.

After the vigil, mourners wrote messages and memories on index cards, which they attached to the chain link fence separating the school and the church with clothespins.

Her night had begun as just another Friday for a teenager — with a party of 15 or 20 close friends bemoaning summer’s approaching conclusion while hanging around the fire pit in the backyard of a house in Mukilteo, Wash., an affluent seaside town near Seattle with a small, tight-knit community.

The party had taken a horrid, deadly turn when a young man, armed with an assault rifle, had opened fire on the party-goers.

The party’s host had attempted to help Alexis escape through the garage. The two rolled under the garage door and prepared to sprint across the street to safety, but the gunman had climbed onto the roof to rain bullets on the party.

The gunman began shooting at the host.

He made it across the street, but Alexis thought the risk was too high.

“She panicked and ran back in the house and hid in the closet until police arrived,” Susan told the Associated Press.

By the time she hysterically called Susan, Alexis had witnessed what no teenager should have to: the slaying of her friends.

“[Alexis] kept saying, “They’re dead, they’re dead. I saw them, I was right there, and I saw them,” Susan said of the harrowing phone call.

At the end of his reign of terror, the gunman killed three 19-year-olds at the party — Jake Long, Jordan Ebner, and Anna Bui — and critically injured 18-year-old Will Kramer, who remained in critical condition at Harborview Medical Center early Monday morning.

“Our community has suffered a great loss tonight,” Mukilteo Mayor Jennifer Gregerson said, the Associate Press reported. “There were many young people who saw and heard things that no one should ever experience.”

About 90 minutes after the shooting, the Washington State Patrol arrested Allen Ivanov after spotting the 19-year-old driving his Subaru WRX on Interstate 5 near Chehalis, nearly 100 miles South of Mukilteo. An “assault-type rifle” rested in his passenger seat, Gov. Jay Inslee said at a memorial Sunday night, according to the Seattle Times.

Ivanov has been booked into the Snohomish County Jail jail for investigation of three counts of murder, including one of aggravated murder, but he has not been charged, the Associated Press reported. He is expected to be arraigned Monday afternoon.

On Sunday, Mukilteo police chief Chuck Macklin said detectives have served four search warrants, including one for his Subaru and one to collect DNA and forensic evidence from Ivanov while he is in jail.

By all accounts, Allen Ivanov seemed like a regular college student, if not an ambitious one. Those who knew him deemed him shy and intelligent.

Leading to the shooting, Ivanov had begun posting ominous messages on his social media platforms.

On the Twitter account he opened in Nov. 2015, he only had two tweets, both posted Thursday. One read, “First and last tweet. I’ve been through it all.” The other stated, “What’s Ruger gonna think?” potentially in reference to Ruger Firearms, which manufactures and sells many types of guns including assault-style rifles.

Earlier in the week, he posted to Instagram a photo of an AR-15 assault rifle with a 30-round magazine. Laid next to it are three loose bullets. Wrapped around the magazine is a sticker featuring the phrase “You still suck.” A piece of blue tape stuck to the gun had the word “Christopher,” Ivanov’s middle name, written on it.

Ivanov captioned the photo with “You can’t run with me” and an emoticon of a frowning face.

Ivanov had known the victims for a while — he, Ebner, Long and Bui had all graduated from Kamiak High School.

Long had left the West Coast to spend a year at the University of Southern Florida, but he had just returned home, where his close-knit circle of friends remained.

“He wanted to be nearer to friends and family,” Jansen Garside, his childhood friend, told the Seattle Times.

His mother, Autumn Snider, said he had been friends with the group since around fifth grade.

“Jake was a kind soul. He was always there for people, and very devoted to his siblings,” Snider told the paper, adding, “All I know is that I have a son who is dead.”

Ebner played baseball with Long and spent much of his free time working at an auto-detailing shop.

But Ivanov arguably knew Bui best of all — the two had been dating since high school. They even chose to attend the same college, where they continued dating.

But after more than a year together, Ivanov ended the relationship, leaving Bui with understandable heartache.

She spent the summer traveling around Europe, sleeping in hostels across the continent, from Spain to the Netherlands, finding herself outside of the relationship.

“When she came back, she was a totally different person. She was happy and free and felt like she didn’t need him anymore,” her friend Matt Bettencourt told the Seattle Times.

Since returning from her trip, Bui spent her weekends working as a certified nursing assistant at the Caring Cabin Adult Family Home in Bothell.

“She was very kind, sweet and intelligent,” the home’s owner, Anne Beale Yancey, told the Seattle Times. “She was very good working with seniors.”

They were a mismatched pair, friends said, her outgoing, effervescent personality contrasting with his reserved, quiet one. She spent high school singing on stages as part The Starry Night, an a capella group, and in a production of “Little Shop of Horrors.” Ivanov, meanwhile, was more focused on computers.

He could also be controlling, according to Bettencourt, but he never threatened violence.

“This makes no sense to me,” he said.

“I would never check Allen as a killer,” Timmerman told KCPQ, then added before he began weeping, “Allen always had this bright smile when I saw him, not to put him in a bright light, but he had a bright smile.”

The University of Washington Bothell urged its students to “counter violence with compassion” in a statement concerning both Bui and Ivanov.

“There’s no doubt some of you know Anna or Allen, or both and will be devastated by this news,” the statement read. “Understanding the cruel twists of life is not an easy task.”

Hundreds gathered at Kamiak High School Saturday evening to hold a vigil for the victims. They passed lit candles to each other in the parking lot and shared stories of the lost teenagers.

“It feels really good to have a community to be connected to,” Olga Manko, Bui’s best friend, told KCPQ. “I thank God for that, because not a lot of places have that.”

At the second vigil was held Sunday, this one at the Mukilteo Church of Jesus Christ Latter Day Saints, which is next door to the high school, Inslee spoke, using the opportunity to comment on gun violence in America.

A memorial for the victims, including their photos, has been erected in the high school’s parking lot. Across the rest of the parking lot are notes scrawled in chalk, fleeting thoughts.

“Rest in God’s arms,” reads one fleeting message, which will wash away with the city’s next rainfall.