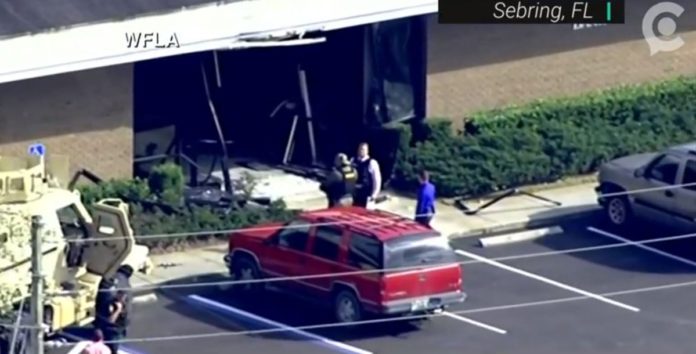 SEBRING — Five people were shot and killed inside a Sebring bank today.

This afternoon at 12:37 p.m., officers with the Sebring Police Department and the Highlands County Sheriff’s Office responded to the SunTrust Bank at 1901 US 27 South in Sebring after a man called dispatch and said “I have shot five people.”

At 12:40 p.m., two members of the Highlands County Sheriff’s Office TAC Unit arrived on scene and, along with other deputies and officers from the Sebring Police Department, established a perimeter. The HCSO SWAT team entered the building, where the suspect had barricaded himself inside, to attempt to check on victims. Crisis Negotiation Team members, along with dispatchers and SWAT members, persuaded the suspect to surrender.

The names and ages of the victims have not been released. They were the only five people in the bank at the time.

The suspect has been identified as 21-year-old Zephan Xaver from Sebring.

The investigation into his motives is still ongoing.

“This has been a tragic day for our community. We’ve suffered a significant loss at the hands of a senseless criminal doing a senseless crime,” Sebring Police Chief Karl Hoglund said. “This is something that you hope will never happen anywhere, much less in your hometown. We will continue to investigate and work to see that the victims and their families are taken care of and that they receive the justice they deserve.”

“I am heartbroken that this horrendous incident has occurred in our county,” Sheriff Paul Blackman said. “I pray for the victims, their families and our community. This tragedy will have a lasting impact on Highlands County and likely this community will never be the same.

“I have been in law enforcement all of my adult life and this horrific incident shocks and angers me more than anything I have encountered in my career. While we still don’t know what drove the suspect to commit this heinous act, there is no excuse that can justify the cold-blooded murder of multiple victims.”