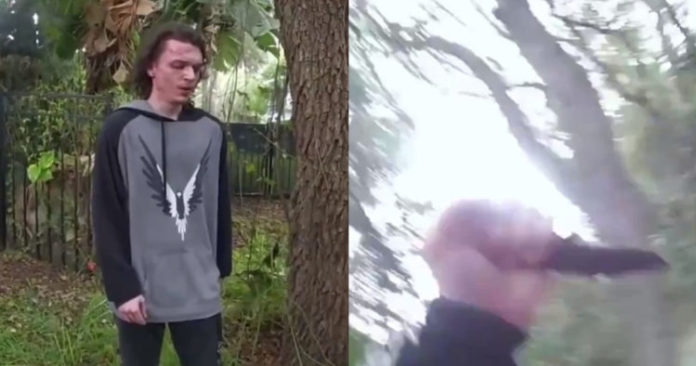 Fishhawk Ranch, Florida— At approximately 12:43 p.m. on October 11, 2020, deputies responded to a home in the Fishhawk Ranch neighborhood of Lithia to assist Gracepoint with an involuntary mental health evaluation. Gracepoint will often request the assistance of law enforcement during these types of evaluations. At this time, Nicholas Furgason, 21, was cooperating with both deputies and Gracepoint personnel. After approximately one hour of medical officials speaking with and evaluating Furgason, at 1:52 p.m., upon learning that he would be admitted to Gracepoint under Florida’s Baker Act, Furgason fled from the home on foot into a heavily wooded area. Deputy Charles Williams pursued him on foot while Deputy Nicholas Cruz followed behind them in an HCSO marked patrol car. After a brief pursuit, Deputy Williams came into contact with Furgason on a wooded trail, and in an effort to calm him down, used de-escalation techniques. Deputy Williams took Furgason’s right arm and attempted to detain him. Unknown to the deputy, Furgason had a knife on him. Furgason pulled the knife out with his left hand, reached over his right shoulder, and stabbed Deputy Williams in the neck.

Furgason again fled from the area while ignoring verbal commands from Deputy Williams to stop. Deputy Williams continued his pursuit for another 100 yards before successfully deploying his taser on Furgason. At this time, both Deputy Williams and Deputy Cruz were able to detain him. After applying QuikClot gauze to the laceration on his neck, Deputy Williams was transported to a local hospital. He was released on Monday morning. Furgason was also taken to the hospital for evaluation. He was cleared and then booked into jail. He is charged with Attempted Felony Murder of a Law Enforcement Officer, Resisting an Officer With Violence, and Resisting an Officer Without Violence. He is being held at the Falkenburg Road Jail on no bond. Furgason was arrested in February of 2019 on charges including Battery (Domestic Violence), Aggravated Assault with a Deadly Weapon, and Resisting an Officer Without Violence. Deputy Williams has been employed with the Hillsborough County Sheriff’s Office since September of 2017.