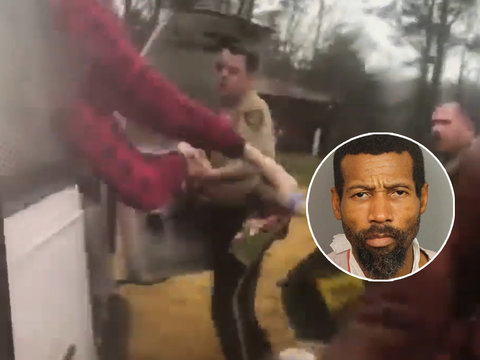 BROOKSIDE, Alabama — (Scroll Down for Video) — At 2:45pm on 12/29/19 a citizen notified Brookside PD of a kidnapping in progress on Brookside Coalburg Rd. The suspect was a black male driving a white van and kidnapped a white female at knife point. The woman was bleeding from the head and face screaming “help he’s gonna kill me!”

The suspect forced the victim into the vehicle and fled towards the area of Republic. The witness followed the vehicle giving police dispatch the vehicle description, direction of travel and tag number. Two Brookside patrol units observed the van passing Sharon Heights Baptist church where the suspect rammed a witness vehicle. Officers attempted to stop the suspect vehicle. The suspect fled on Bivins Brookside Rd towards Main Street. Officers engaged a vehicle pursuit.

Brookside Tactical response units and Jefferson County SO arrived on the scene. Officers continued to negotiate with the suspect as he held the victim hostage. The suspect was demanding the officers kill him. Fearing immediate danger to the victim Brookside tactical officers breeched the rear of the suspect vehicle, tased the suspect and made entry into the front of the vehicle to engage the suspect, while JCSO Deputies assisted with the rescue of the victim. The suspect was taken into custody while still inside the van.

The suspect was identified as Sean E. Sanders of Los Angeles, California. He has an extensive criminal history. The van was barricaded with a cage in the back, wire cages over the windows, with blankets covering the inside preventing anyone from seeing inside. The doors were also chained shut from the inside. Upon further investigation the victim and witness stated the suspect was attempting to drag the female victim into the woods along Brookside Coalburg Rd with the intent to kill her when the witness stopped and encountered the suspect. The suspect then fled as the witness followed while calling 911.

The suspect was transported to the Brookside Jail pending multiple felony charges. The victim sustained serious physical injury with cuts to the head and face as the suspect struck her in the head multiple times with a tire iron. She was treated on the scene after the rescue and transported to the hospital in stable condition.

Sanders admitted to assaulting her in graphic detail and stated he “tried to run over a police officer and continued the stand off with police because he wanted the officers to kill him.” He also stated he wanted the death penalty for his actions.