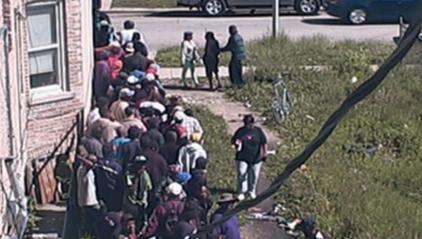 CHICAGO — Superintendent Garry McCarthy, along with numerous other partners including the DEA, ATF, U.S. Attorneys and IL States Attorneys, announced charges against 42 individuals in connection with selling heroin out of North Lawndale.

The main suspect in the bust is 33-year-old Triplett, AKA “Trell,” who authorities said controlled the drug market in the area.

The shocking photo depicts a line of people waiting on June 16 to get their hands on heroin supplied by Triplett’s organization in the 3700 block of West Grenshaw, according to criminal complaint.

The drug house was one of the most “prolific” spots along the Heroin Highway and one of the worst spots in the city, police said.

Police said they searched three “stash houses” and several of the defendants’ homes on Wednesday, seizing two cars, including a 2014 Maserati GranTurismo.” —

Authorities say the heroin was diluted to increase profits.

“Too many lives in Chicagoland are forever lost due to heroin use,” Dennis Wichern, special agent in charge of the Chicago Field Division of the Drug Enforcement Administration said in a statement. “I’m proud of the work done by these agents, officers and prosecutors, who worked tirelessly to achieve these results and I’m confident that with our continued partnership, we will have increasing success.”