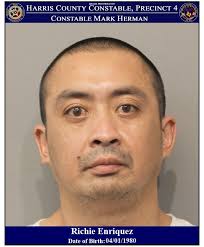 SPRING, Texas — On Saturday, Harris County Deputies responded to the 18000 block of Bambridge Drive due to a reported burglary.

The victim told deputies that she observed a unknown Hispanic man standing in her living room. The victim ran to a bedroom and the suspect chased behind her and attempted to kick in the bedroom door.

The victim stated that she yelled loudly and the suspect then exited the residence and got into his vehicle and stayed in the driveway. The victim then followed and blocked him in. She stated that while waiting for Constable Deputies, the suspect inquired about purchasing illegal narcotics.

Constable Deputies arrived quickly and identified him as Richie Enriquez.

Enriquez was arrested and booked into the Harris County Jail, charged with Burglary of a Habitation. His bond was set at $2,500.00 out of the 230th District Court.