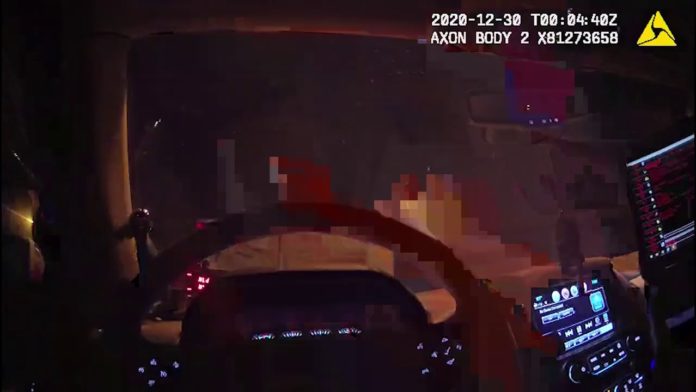 VOLUSIA COUNTY, Fla. — (VOLUSIA SHERIFF / NEWS RELEASE) — This is body camera footage of the events leading up to last night’s fatal crash on I-95, caused by a fleeing vehicle in an armed carjacking case.

Watching this video is difficult, knowing that two young, innocent lives (ages 18 and 21) were lost when the suspect crashed into their vehicle. The suspect was also killed in the crash.

The suspect, a career criminal, had a 200 page record and 50 prior arrests.

The crash itself was not captured on body camera and is not shown here, but the wreckage is visible at the end, along with some brief audio of deputies approaching to render aid.

The Sheriff’s Office is providing this video publicly because the seriousness of the incident requires full transparency. The footage provides an understanding of the pursuit that ended prior to the suspect driving into oncoming traffic.

Florida Highway Patrol troopers are handling the investigation of this tragic crash, with the Sheriff’s Office providing whatever assistance is needed.

Sheriff Mike Chitwood’s statement is below:

Last night, a horrific tragedy took two innocent, young lives from a family on their way home from seeing Christmas lights. A suspect in an armed carjacking fled from law enforcement at speeds over 110 mph, made a U-turn into oncoming traffic on I-95, and caused a fatal head-on crash.

The victims who lost their lives were 18 and 21. The children in the back seat, who survived, are 13 and 17. My heart is broken for them, their parents, their entire family. I can’t imagine facing a loss like this, having to endure such unspeakable pain caused by such a senseless act.

We see so many terrible things in this job. But in looking at the faces of all the deputies, troopers, firefighters and paramedics on scene last night, I believe this tragedy was especially difficult for even the most experienced of us to process.

My deepest condolences are with this family, and my thoughts have not left them since I came home from that terrible scene last night. Please keep them in your prayers if you are one who prays. I am praying that the memories of their loved ones lends this family the strength they need to grieve and endure a loss that would bring any of us to our knees.