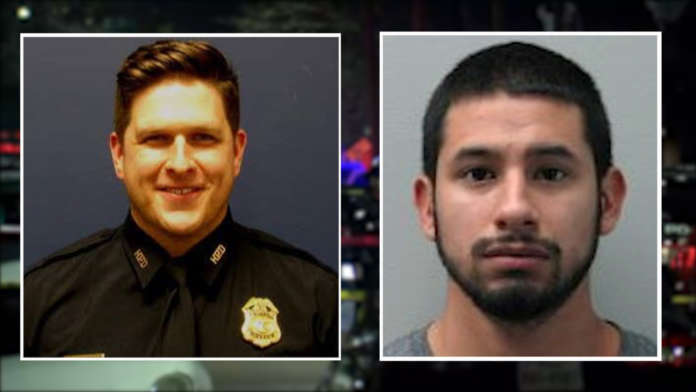 HOUSTON, Texas — Charges have been filed against a suspect arrested in the fatal shooting of a Houston Police Department sergeant that occurred at 7400 Avenue L about 5:45 p.m. on Saturday.

The suspect, Arturo Solis, 25, is charged with capital murder of a police officer in the 182nd State District Court.

The victim, HPD Sergeant Christopher Brewster, 32, was transported to Memorial Hermann Hospital where he was pronounced dead.

At 5:45 p.m., officers were dispatched to a disturbance with a weapon call at 7413 Avenue I. A woman had called 911 to report she was being assaulted by her boyfriend and he was armed.

The suspect fled the scene and responding officers immediately began first aid on Sergeant Brewster and assisted in establishing a perimeter. Solis was located after an extensive search and arrested.

The Chief said the incident was captured on body camera.

“What people will see is a coward who took the life of a hero,” Acevedo said.

Sergeant Brewster was sworn in as an HPD officer in November 2010 and was assigned to the Eastside Patrol Division.