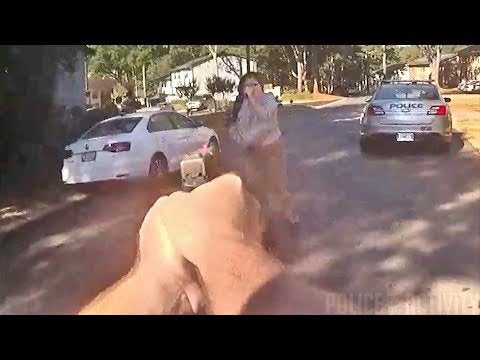 GEORGIA — (Scroll Down For Video) — The Athens-Clarke County Police Department has released the body camera footage from the October 14th Officer Involved Shooting on Chalfont Drive with Bonny Thomas and Senior Police Officer (SPO) Lamar Glenn. At approximately 10:15 am on October 14th, ACCPD was dispatched to the 100 block of Chalfont Drive for a suspicious person call involving a female who was said to be armed with a gun and a knife. As the video begins, SPO Glenn (53 YOA) arrives at the scene and notices Thomas (54 YOA) appearing to flag him down. As Glenn is preparing to exit his vehicle, he sees that Thomas has a butcher knife in one hand. After Glenn exits his vehicle, Thomas continues towards him with a knife in one hand while her other hand is concealed under her shirt.

Glenn retreats towards the rear of his vehicle while issuing verbal commands for Thomas to drop the knife. Thomas ignores these commands and continues to walk towards Glenn with the knife raised above her head saying, “I have a gun and a knife.” The video shows that Glenn continues to retreat. He refrains from using force against Thomas until she runs towards him with the knife raised above her head in a threatening manner. Glenn fires one shot striking Thomas in the torso. After additional officers arrived, ACCPD administered first aid to Thomas until EMS arrived. Thomas was transported to a local hospital where she later died. The GBI is continuing its investigation into this Officer Involved Shooting.