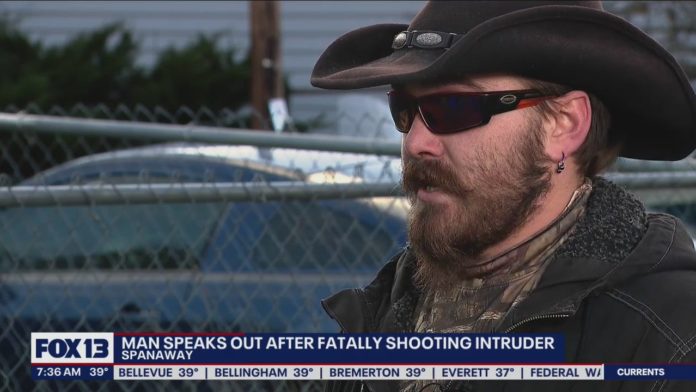 SPANAWAY, Wash. – The Pierce County Sheriff’s Office says an armed homeowner shot and killed one of two men who were attempting to break into his house.

At 04:21 a.m. on Dec. 11, 911 dispatchers received a call of a home invasion in Spanaway near 165th St E and A St E. The caller reported the homeowner shot at the intruders who fled on foot. When deputies arrived on scene they found one of the suspects unresponsive in the front yard. Medics arrived on scene and pronounced him as deceased. Deputies performed an area check for the other suspect but were unable to locate him.

The deceased suspect has been identified only as a 24 year old man. No arrests have been made and detectives will finish the investigation and forward the case to the Pierce County Prosecutor’s Office for review.

Deputies say the homeowner, 31-year-old Jerahme Smith, has been cooperative and were uninjured in this incident.

“When everything first started, the first thing I had to do was take a few breaths and calm myself down because I knew it could have gone one of two ways,” Smith told FOX 13. “I didn’t know who they were, I didn’t know what they had, but the first thing I did–and it’s the honest to God truth–is I took a few breaths to myself. That way I knew I was calm enough to make a proper judgment decision.”