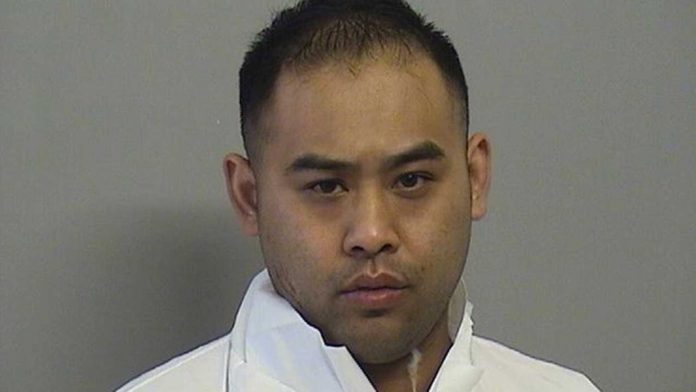 TULSA, Okla. – A Tulsa man was arrested on Monday after he allegedly staged the scene to cover his stepfather’s murder.

Around 1:30 a.m., officers responded to 911 call at a home near 21st and Sheridan. Officers found 70-year-old Edward Johnson dead in the front yard. Police say it appeared Johnson was “severely beaten to death.”

Johnson’s stepson, 28-year-old Som Sai Hakchareun, admitted to “getting in a fight” with Johnson, police said.

Hakchareun told officers, “I killed that mother******.”
‘
Hakchareun also told detectives that the incident occurred earlier in the day, and that he moved the body and hid it on the side of the house.

Cops say he also admitted that he moved the body again prior to the police being called and staged the crime scene.

Tulsa World reported: His head injuries indicated he had been hit with a metal object, the report states, and officers found a garden hoe near his body. Harchareun initially told police he found Johnson in the front yard and then told his mother, who called 911, according to the report.

Hakchareum is in jail on one count of first degree murder.