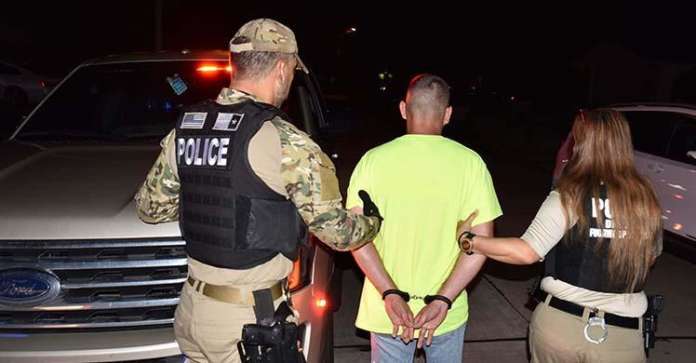 HOUSTON — Deportation officers with U.S. Immigration and Customs Enforcement (ICE) on Wednesday arrested a three-time deported Mexican man who is wanted on an outstanding warrant for homicide in Anaheim, California.

Leopoldo Serrano Vargas – aka Leonel Serrano Vargas and Ricardo Hernandez – an illegal alien from Mexico of uncertain age (reported as both 44 and 46), was arrested Sept. 11 at his residence in Northeast Houston for illegally re-entering the United States after having been deported, which is a felony.

“For almost two decades this criminal alien fugitive has gone to tremendous lengths to avoid detection by law enforcement authorities for his alleged crimes in California,” said Patrick Contreras, field office director for ICE Houston. “Our ICE Fugitive Operations team tracked down and arrested Serrano Vargas, removing a potentially dangerous criminal alien from our community and ensuring that he will face prosecution for his alleged crimes.”

APD detectives contacted ICE officials earlier this year after receiving a tip from OCDA that a suspect from a 2000 homicide was possibly living in the Houston area under an assumed name. APD and ERO Houston further investigated, which led to ICE locating and arresting Serrano Vargas. Following this arrest, OCDA’s Science and Technology Unit assisted in confirming Serrano Vargas’ identity through the use of Rapid DNA technology.