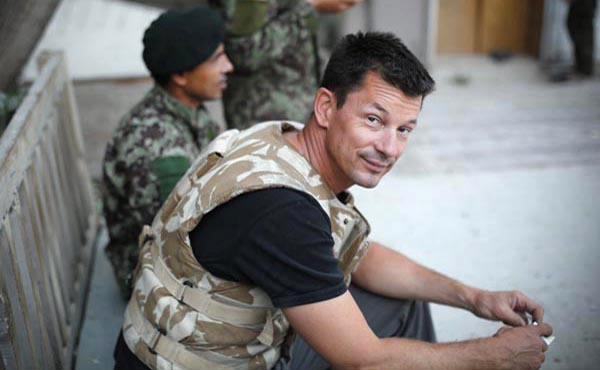 British citizen and Islamic State hostage, John Cantlie has told his family to ‘let him go’ and ‘get on with their lives’ – days after appearing on a propaganda video which he warned was the last in the series.

In an article released last night for the terror group’s magazine, Dabiq, Cantlie thanks his relatives and fiancee for their ‘tireless efforts’ campaigning for his release.

In the propaganda magazine just released, Cantlie says: “Despite being a prisoner, I’ve been shown respect and kindness, which I haven’t seen from my own government. Even if I had the choice, could I honestly return to and live in a country that disowned the other Britons, all their families, and myself so contemptuously?”

“The British government was entirely happy to watch as an 81-year-old man made a film asking for my release from his hospital bed, then die because he didn’t want to see his youngest son executed. That was my dad,” Cantlie continues, referring to his late father.

“The only thing I’m aware that the British government has done in my case is to comment pointlessly on the release of my videos,” Cantlie’s article reads. “Family and friends have done far more for the other Britons and myself who were imprisoned out here.”

Cantlie goes on to criticize Western air strikes against ISIS, saying: “Every bomb dropped in Syria or Iraq serves as a recruitment tool for the Islamic State.” However, it is impossible to verify whether Cantlie wrote the article and which parts have been edited by ISIS propagandists.

“Thank you so much for your tireless efforts,” Cantlie’s article reads. “But let it go. Leave it be and get on with your lives, all of you,” he tells his family, fiancée and friends.