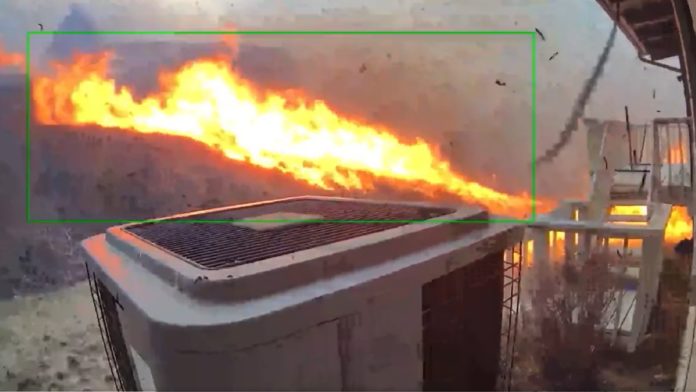 Home surveillance video captured crazy video of the Marshall Fire as it destroyed neighborhoods in Boulder County, Colorado last Thursday. At least one death from the wildfire was reported and there were at least six injuries. Nearly 1,000 homes and structures were destroyed in the wind-driven blaze.

“Today has been surreal,” the homeowner Wendy wrote as she posted the footage on Twitter. “I’m numb. I have no idea if our house is still standing, if anything is left. I posted this video because 4 minutes before the flames were visible here there was blue sky and the smoke seemed uphill and over a ridge from us, upwind this was pre-evacuation, at 1:30pm. Our daughter was not in town. Our son drove to the house to grab valuables just in case. We couldn’t think of much to tell him to grab. We still weren’t too worried. As he drove away the flames swept up to our home. We watched in disbelief.”

“I’ve done a couple local interviews,” she added, “my messages are this: *evacuate when told. *Make lists ahead of time so you don’t have to rely on your crisis brain to think. *we are f*cking up our planet (this is not normal). *I wish I wore my wedding ring when I left this morning.”

Camera outside my home off S.Boulder Rd just West of Davidson Mesa. I don’t know if my home is still there.#boulderfire pic.twitter.com/G2zYfADtBz