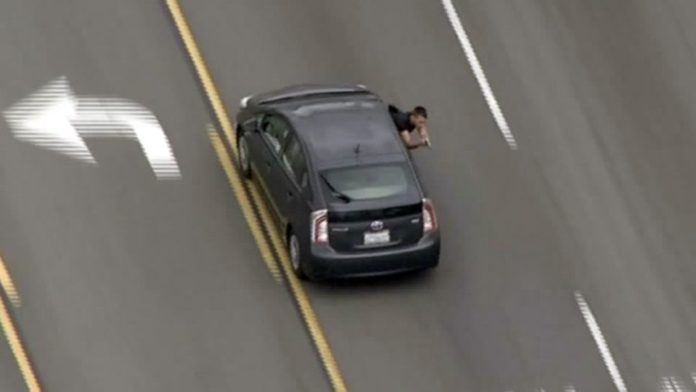 LOS ANGELES — A man and a woman who led police in a pursuit and shootout which ended in Vernon with a standoff with police were charged today.

Dylan Andres Lindsey, 24, faces one count of murder and eight counts of assault with a firearm upon a peace officer.

Codefendant Alison Hart, 37, faces one count each of accessory after the fact – knowledge of crime – and fleeing a pursuing peace officer’s motor vehicle while driving recklessly.

Lindsey is charged with the shooting death of Gurpreet Singh, 45, at a Downey liquor store on May 7, prosecutors said.

BREAKING: After a gunbattle during a high-speed freeway pursuit in Los Angeles County, a driver of a Toyota Prius whose passenger was shooting at officers is now in custody.

It was not immediately clear whether anyone was struck by the gunfire. – KNTV

Deputy District Attorney Antonella Nistorescu of the Crimes Against Peace Officers Section is the assigned prosecutor.

The case remains under investigation by the Los Angeles County Sheriff’s and Downey Police Departments.