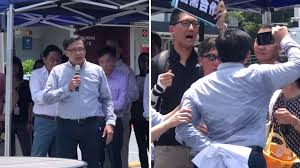 Before the stabbing, the suspect thanked Ho for his hard work, according to video footage. The lawmaker suggested a selfie and the man said he would take his phone out — but then produced a knife and stabbed Ho.

The suspect was arrested and Ho was taken to a hospital where he is expected to survive.