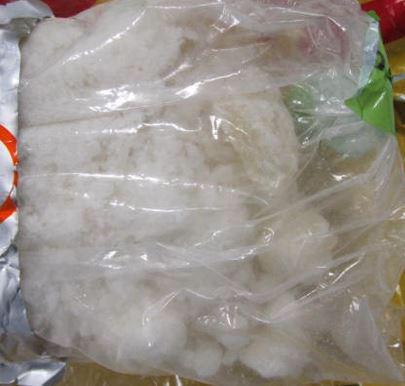 CBP officers found the package to be suspicious and selected it for further inspection. A total of approximately 1.99 kilograms was seized and all evidence was turned over to Immigration and Customs Enforcement (ICE), Homeland Security Investigations (HSI).

Flakka is typically sold as powder or crystals and can be administered by snorting, swallowing in pill form, injection, or smoking. Use with electronic cigarettes is increasing. The appeal to recreational users is that flakka is easily accessible and can go undetected in routine drug testing.

Flakka affects the user in a variety of ways, ranging from an elevated heart rate and mild anxiety, to paranoia and psychosis. Persons under the influence of flakka generally report a feeling of euphoria, but have been known to become aggressive and combative. Flakka is also highly addictive, as users report the desire to binge, especially when vaporizing the drug.

“Flakka is an extremely dangerous drug and we are very proud of our CBP officers for intercepting this package and keeping this drug off the street,” said Jacksonville Port Director Douglas Straatsma.

U.S. Customs and Border Protection is the unified border agency within the Department of Homeland Security charged with the management, control and protection of our nation’s borders at and between the official ports of entry. CBP is charged with keeping terrorists and terrorist weapons out of the country while enforcing hundreds of U.S. laws.