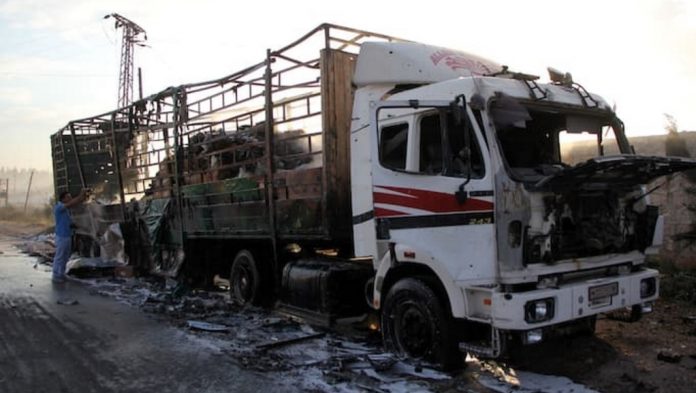 NEW YORK – At least a dozen humanitarian aid workers, and an unknown number of civilians, were killed Monday in an airstrike on a convoy delivering assistance west of Aleppo that the Obama administration said was likely launched by the Syrian government or Russia.

“We know it was an airstrike and not one from the coalition. We don’t know if it was Russia or the regime,” the only others flying over Syria, a senior administration official said. “In either case, the Russians have a responsibility certainly to avoid doing it themselves, but also to keep restraint on the regime.”

In a statement issued late Monday, the State Department said, “The destination of this convoy was known to the Syrian regime and the Russian federation and yet these aid workers were killed in their attempt to provide relief to the Syrian people.”

The attack, on a day when the Syrian government declared the end of a nationwide cease-fire and launched dozens of airstrikes in and around Aleppo, may spell the final end of the U.S.-Russia agreement. Begun just a week ago, it was intended to pause to the fighting, allow aid to reach that city and other besieged areas of the country, and restart political negotiations to resolve the civil war.

The deal also envisioned eventual coordination between Russia and the United States of counterterrorism airstrikes against the Islamic State and a former al-Qaeda affiliate.

But the day’s events “fundamentally calls into question the viability of what we’re trying to achieve … given the severity and the outrageousness of what took place,” the official said.

“We don’t know if [the agreement] can be salvaged,” said the official, one of two who briefed reporters here on the condition of anonymity, on the eve of President Obama’s speech to the United Nations General Assembly. “At this point, Russia has the burden of demonstrating very quickly their seriousness of purpose … otherwise, there will be nothing to salvage.”

Secretary of State John Kerry has scheduled a meeting early Tuesday of the international group of nations representing major actors in Syria. It includes the United States and its partners backing the Syrian rebels, and Russia and Iran, which back Syrian President Bashar al-Assad. Officials said Kerry would have a face-to-face meeting with Russian Foreign Minister Sergei Lavrov, also here for the General Assembly, as soon as possible.

“We need to see what the Russians say,” Kerry said earlier in the day, as first reports of heavy bombing began to emerge and the Syrian declaration that the cease-fire was over. “The important thing is the Russians need to control Assad.”

U.N. special envoy Staffan de Mistura, speaking later in Geneva of the convoy bombing, said that “Our outrage at this attack is enormous … the convoy was the outcome of a long process of permission and preparations to assist isolated civilians.”

Details of the attack were still unclear, along with the number of casualties, as the bomb site continued to smoulder. Activists and humanitarian organizations variously put the number of dead aid workers between 12 and up to several dozens.

Anna Nelson, a spokeswoman for the International Committee for the Red Cross said that “several Syrian Red Crescent volunteers have been killed.”

The strike took place on the western side of Aleppo, where aid workers were unloading crates of assistance at a warehouse in an area known as Urem al-Kubra, operated by the Red Crescent, which has worked with the United Nations and the ICRC on aid operations inside Syria. In addition to the warehouse, at least seven to 10 trucks were also said to have been hit. Reports from workers on the scene said most of the dead were drivers.

Earlier in the day, a spokesman for Russian forces based in Syria said that the Front for the Conquest of Syria, the al-Qaida group formerly known as Jabhat al-Nusra, had launched a large-scale assault on Syrian forces in the southwestern outskirts of Aleppo.

The attacks, the spokesman said, were preceeded by massive artillery fire from tanks, multiple rocket launchers and mortars, targeting “governmental troop positions and residential areas on the southwestern edge of Aleppo.” Government forces, it said, “are conducting fierce defensive battles in order to prevent the groups of terrorists from breaking into the central part” of the city.

In its statement saying the truce was over, Syria’s military blamed rebel groups for violating it. Government forces immediately began shelling the rebel-held part of Aleppo, which has been under siege for more than a month. Airstrikes and barrel bombs pummeled the city.

Tensions were already at a high between the United States and Russia. Over the weekend, coalition warplanes, apparently inadvertently, struck a camp of Syrian government troops in the eastern part of the country, killing what Syria said were more than 60 soldiers. The U.S. military quickly acknowledged the strike, saying it was targeting Islamic State positions, offered its regret and said it was investigating what appeared to have been an intelligence failure.

Russian and Syrian officials have suggested the airstrike was intentional, and proved the United States was secretly supporting the Islamic State as part of the U.S. effort to overthrow Assad.

Rejecting any equivalence between the Saturday strikes and what happened outside Aleppo Monday, the senior administration official said “what took place today unfortunately was a pattern and practice that we have seen going back a number of months and even years, in which the Syrian regime has taken strikes not only against civilians but also against opposition groups” who have signed cease-fire agreements. The two incidents, the official said, were not “in remotely the same category.”

Rebels said the government had repeatedly violated the truce in the past week, long before Monday’s major barrage of airstrikes.

Humanitarian workers said there were at least 35 strikes in Aleppo Monday. Rescue workers were struggling to find the injured because power has been out in the city. As many as 275,000 people are cut off from food, water and electricity in eastern Aleppo, U.N. officials say.

The delay in aid deliveries has also frustrated the U.S.-backed opposition, which has criticized the United Nations for seeking approval from the Syrian government.