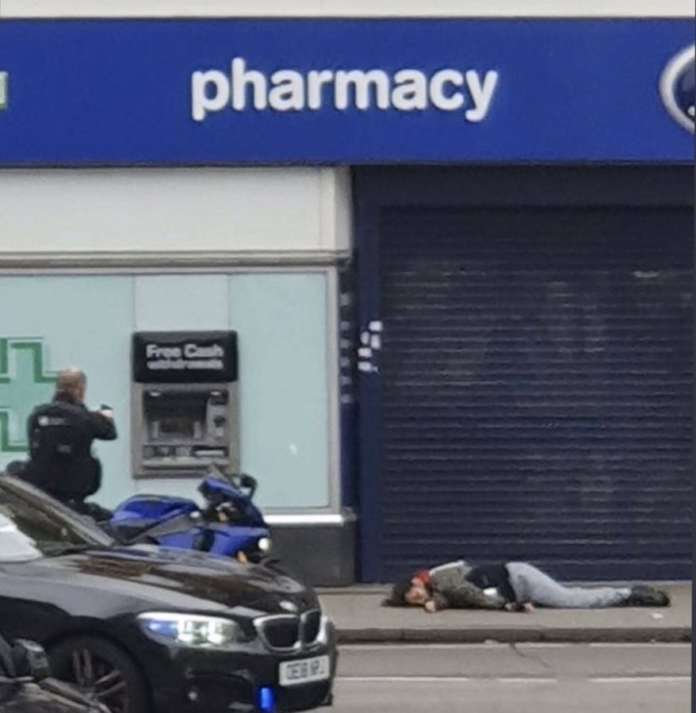 Two were stabbed by a terrorist on a busy street in south London Sunday, and a third person was injured by glass after a police gun shot.

As part of a proactive Counter Terrorism operation, armed officers were in immediate attendance and shot a male suspect, who was pronounced dead at the scene. A third person also received minor injuries – believed to have been caused by glass following the discharge of the police firearm.

A device was found strapped to the body of the suspect and specialist officers attended.

Cordons were put in place and it was quickly established that this was a hoax device.

Three victims have been taken to south London hospitals. One man is being treated as life-threatening, one woman has non-life threatening injuries and another woman has minor injuries.

My thoughts are with the victims and their loved-ones at this time.

The situation has been contained and officers from the Met’s Counter Terrorism Command are now leading an investigation into the incident. The incident was quickly declared as a terrorist incident and we believe it to be Islamist-related.

However as you would expect, officers continue to work in the area to ensure there is no continuing danger to the public and that all evidence is gathered. Streatham High Road remains closed at this time, and cordons are in place. We will reopen these as soon as we can.

We would like to thank the numerous members of the public who assisted officers and ambulance staff this afternoon following a very confusing and alarming incident.

Public safety is obviously our top priority and to reassure the public we will be enhancing police patrols in the area.

I would ask anyone with information, images or footage of the incident that this be shared with our investigation team. Image and video can be shared via the UK Police Image appeal website at www.ukpoliceimageappeal.com.