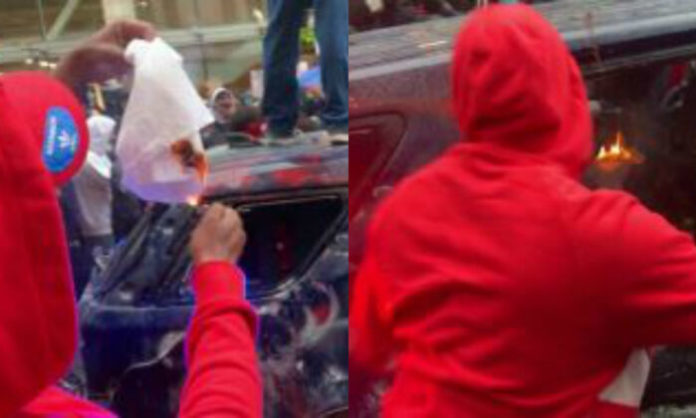 Seattle – A felon from Georgia, with a domestic violence conviction and no contact order in Washington State, was arrested yesterday charged with arson and weapons crimes for his conduct during civil unrest on May 30, 2020, announced U.S. Attorney Brian T. Moran. Tyre Wayne Means Jr. will make his initial appearance in federal court at 2:00 today on a criminal complaint charging him with four federal felonies: arson, possession of a stolen firearm, and two counts of unlawful possession of a firearm.

“This is just the latest in a series of cases where our office has brought federal criminal charges related to civil disorder, and should be a wake-up call for those who think they can commit crimes hidden by a crowd,” said U.S. Attorney Moran. “Federal law enforcement and local police are piecing together publicly available video and photographic evidence to identify and ultimately prosecute those who thought they could escape accountability for their actions. In this case it means a felon, who is legally barred from possessing firearms, now faces tough federal sanctions.”

According to the criminal complaint, just after 4:00 p.m. on May 30, 2020, Means Jr. was captured on video lighting a paper towel and placing it in the back of a Seattle Police patrol car parked outside of Nordstrom on 6th Avenue in downtown. Other persons in the crowd fed the fire with lighter fluid and other accelerants and the vehicle was destroyed by fire. After he lit one patrol car on fire, Means Jr. is observed on video reaching through the destroyed rear window of a different patrol car and removing a rifle bag. Means Jr. opens the bag, and looks inside. Means Jr. is seen fighting with an unidentified man who tries to retrieve the rifle bag before Means Jr. runs from the scene. A subsequent surveillance video on Pine Street, around the corner from where the rifle was stolen, shows Means Jr. in a fight with another man. While Means Jr. and the man are throwing punches, an unidentified man picks up the rifle bag and ultimately walks away. Later that day the rifle was anonymously returned to the Seattle Police West Precinct.

Means Jr. was identified as the suspect in the video by his distinctive clothing, jewelry, tattoos, and association with a female who also had distinctive tattoos and a significant social media presence. Means Jr. was arrested in Bremerton, Washington, where he was meeting with his Washington State Department of Corrections probation officer.

Means Jr. is prohibited from possessing firearms due to two felony convictions in the state of Georgia: serious injury by vehicle and obstructing law enforcement by use of threats or violence. In Washington, Means Jr. has a felony conviction for domestic violence that includes a no-contact order–that order also prohibits him from possessing firearms.