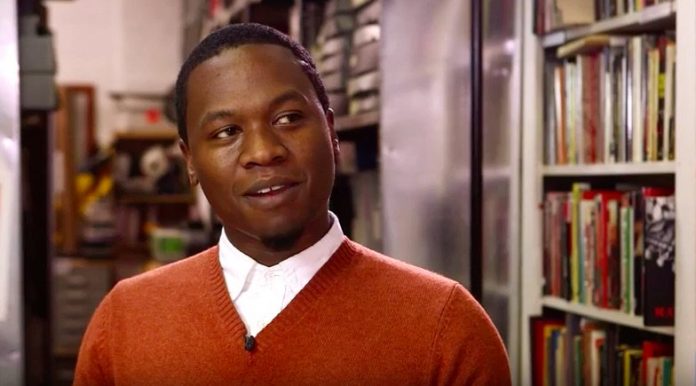 The federal authorities have charged a St. Louis man with making more than half a dozen bomb threats against Jewish community centers, schools and a Jewish history museum, an unsealed court document shows.

Juan Thompson, 31, was arrested in St. Louis, Missouri. He is accused of making at least eight of the threats against JCCs.

Juan Thompson, made some of the threats in his own name and others in the name of a former girlfriend, apparently in an attempt to intimidate her, according to a federal complaint filed by the United States attorney’s office in Manhattan and unsealed on Friday.

He accused President trump of ethnic cleansing in a Feb 23 Tweet.

Make no mistake: #Chicago's southside is about to be ethnically cleansed. It will look drastically different in 10 yrs. pic.twitter.com/JVQ1mrp4i4

Make no mistake. Trump is a developer. This is his and the white establishment's effort to remove black ppl from the southside of Chicago. https://t.co/fe47RB8gQU

Thompson, a former Chicago journalist was previously linked to a “pattern of deception” involving fabricating quotes and creating fake email accounts while writing for The Intercept, a New York-based online publication.

Juan Thompson, whose employment as a staff reporter for The Intercept ended more than a year ago, previously worked as an intern at Chicago Public Media WBEZ FM 91.5 and at DNAinfo.com Chicago. (In his bio, he exaggerated his roles with both Chicago companies.)

He also claimed in a tweet that he was “reverting to Islam”.

I just returned from Senegal after weeks in that beautiful country. Plus I'm correction: *reverting* to Islam. 2016 has been a crazy year.

In another tweet Thompson calls 42% of Americans “filthy fascist appeasers, and says they should be “taken out along with (President) Trump”.

42% of Americans are filthy fascist appeasers and they should be taken out along with Trump. https://t.co/jmdyGCFyu8

He says he was once nearly got killed in a a drive-by shooting:

Four months ago today I was shot in a stupid drive-by, went into cardiac arrest, was in a coma, but lived. I'm a fighter & won't be stopped. 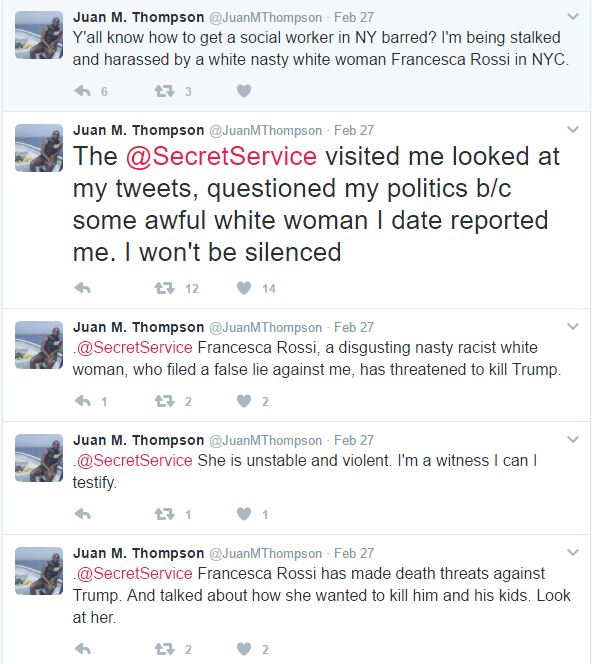 THE FOLLOWING IS THE INDICTMENT:

Preet Bharara, the United States Attorney for the Southern District of New York, William F. Sweeney Jr., the Assistant Director-in-Charge of the New York Field Division of the Federal Bureau of Investigation (“FBI”) and James P. O’Neill, the Commissioner of the New York City Police Department (“NYPD”), announced the unsealing of a complaint charging JUAN THOMPSON with cyberstalking a particular woman (“Victim-1”), by, among other things, communicating threats to Jewish Community Centers (“JCCs”) in Victim-1’s name. THOMPSON was arrested in St. Louis, Missouri, this morning and is expected to be presented there later today.

U.S. Attorney Preet Bharara said: “Everyone deserves to be free from fear and discrimination based on religion, race, or ethnicity; that is fundamental to who we are as a nation. Together with the FBI and the NYPD, we have been investigating the recent threats made on Jewish Community Centers in New York and around the country. Today, we have charged Juan Thompson with allegedly stalking a former romantic interest by, among other things, making bomb threats in her name to Jewish Community Centers and to the Anti-Defamation League. Threats of violence targeting people and places based on religion or race – whatever the motivation – are unacceptable, un-American, and criminal. We are committed to pursuing and prosecuting those who foment fear and hate through such criminal threats.”

FBI Assistant Director-in-Charge William F. Sweeney Jr. said: “Thompson’s alleged pattern of harassment not only involved the defamation of his female victim, but his threats intimidated an entire community. The FBI and our partners take these crimes seriously. I would also like to thank the NYPD and the New York State Police, who continue to work shoulder to shoulder with us as we investigate and track down every single threat and work together to achieve justice for our communities that have been victimized by these threats.”

Police Commissioner James P. O’Neill said: “The defendant allegedly caused havoc, expending hundreds of hours of police and law enforcement resources to respond and investigate these threats. We will continue to pursue those who peddle fear, making false claims about serious crimes. I’m grateful for the collaboration between the NYPD detectives, FBI agents, and prosecutors whose cross-country investigation led to this morning’s arrest.”

According to the allegations in the Complaint unsealed today in Manhattan federal court[1]:

In recent months, the FBI and this Office have been investigating a series of threats across the country principally targeting JCCs, schools, and other organizations that provide service to and on behalf of the Jewish community (the “JCC Threats”). Based on the investigation, THOMPSON appears to have made at least eight of the JCC Threats as part of a sustained campaign to harass and intimidate Victim-1. THOMPSON’s harassment of Victim-1 appears to have begun shortly after their romantic relationship ended and to have included, among other things, defamatory emails and faxes to Victim-1’s employer, false reports of criminal activity by Victim-1, and JCC Threats in Victim-1’s name.

In July 2016, an email was sent to Victim-1’s employer that made false allegations about Victim-1, including that she had broken the law, using an internet protocol (“IP”) address that THOMPSON had previously used to access his social media account. On October 15, 2016, an IP address that traced back to THOMPSON’s residence was used to report falsely that Victim-1 possessed child pornography. When confronted by law enforcement on November 22, 2016, THOMPSON claimed that his email account had been hacked a few weeks earlier.

In January and February 2017, THOMPSON appears to have made at least eight JCC Threats as part of his campaign of harassment against Victim-1. For instance, on or about February 21, 2017, the Anti-Defamation League (“ADL”) received an emailed threat at their midtown Manhattan office, which indicated that “[Victim-1’s name and birthdate] is behind the bomb threats against jews. She lives in nyc and is making more bomb threats tomorrow.” The next day, the ADL received a phone call claiming that explosive material had been placed in the ADL’s midtown Manhattan office.

Some of THOMPSON’s JCC Threats appear to have been made in his own name, as part of an effort to claim that Victim-1 was trying to frame THOMPSON for a crime. For instance, on or about February 7, 2017, a JCC in Manhattan received an emailed bomb threat from an anonymous email account, which stated: “Juan Thompson [THOMPSON’s birthday] put two bombs in the office of the Jewish center today. He wants to create Jewish newtown tomorrow.” The email’s use of the phrase “Jewish newtown” appeared to refer to a December 2012 school shooting in Newtown, Connecticut, in which a gunman murdered 26 victims, including 20 children.

In February 2017, a Twitter account that appears to be used by THOMPSON (the “Thompson Twitter Account”) was used to accuse Victim-1 of responsibility for the JCC Threats and claim that Victim-1 was trying to frame THOMPSON for her crimes. For instance, on February 24, 2017, the Thompson Twitter Account posted: “[s]he [Victim-1], though I can’t prove it, even sent a bomb threat in my name to a Jewish center, which was odd given her antisemitic statements. I got a visit from the FBI. So now I’m battling the racist FBI and this vile, evil, racist white woman.” On February 26, 2017, the Thompson Twitter Account posted “The hatred of Jews goes across all demos. Ask NYC’s [Victim-1’s employer]. They employ a filthy anti-Semite in [Victim-1]. These ppl are evil.”

THOMPSON, 31, of Saint Louis, Missouri, is charged with one count of cyberstalking, which carries a maximum sentence of five years in prison. The maximum potential sentence in this case is prescribed by Congress and is provided here for informational purposes only, as any sentencing of the defendant will be determined by the judge.

Mr. Bharara praised the outstanding investigative work of the FBI and the New York City Police Department, as well as the United States Secret Service, the St. Louis Police Department, the U.S. Attorney’s Office for the Eastern District of Missouri, and the Computer Crime and Intellectual Property Section of the United States Department of Justice for their ongoing investigative assistance. This investigation, as well as investigations into the other threats made to the Jewish community organizations in New York City are ongoing.

The prosecution is being handled by the Office’s Terrorism & International Narcotics Unit and the General Crimes Unit. Assistant U.S. Attorney Jacob Warren is in charge of the prosecution.