SCRANTON – The United States Attorney’s Office for the Middle District of Pennsylvania announced that Corbin Kauffman, age 30, of Lehighton, Pennsylvania, was charged by a criminal complaint on April 1, 2019, with interstate transmission of threats to injure the person of another.

According to United States Attorney David J. Freed, the complaint alleges that Kauffman posted threatening images and messages on a website called Minds.com on March 7, 2019. It further alleges that Kauffman used various aliases online to post hundreds of anti-semitic, anti-black, and anti-Muslim messages, images, and videos. Several of these posts included threats to various religious and racial groups, and one included a digitally created image of Kauffman aiming an AR-15 rifle at a congregation of praying Jewish men. Other posts allegedly expressed a desire to commit genocide and “hate crimes,” and called for or depicted images of the killing of Jewish people, black people, and Muslim people. 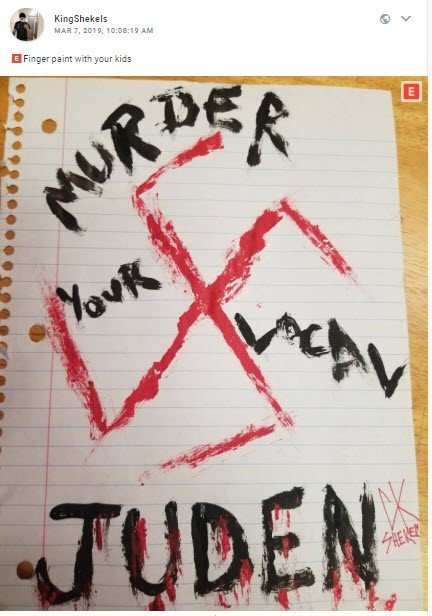 Kauffman also posted pictures of acts of vandalism he committed, including anti-semitic graffiti at a public park, and the defacement of a display case at the Chabad Jewish Center in Ocean City, Maryland with white supremacist and anti-semitic stickers.

“Pennsylvanians know all too well how dangerous these kinds of white supremacist threats can be,” said U.S. Attorney Freed. “The last thing we want is to see another tragedy like we saw at Tree of Life Synagogue in Pittsburgh, or at Al Noor Mosque in Christchurch, or at Emmanual African Methodist Episcopal Church in Charleston. We don’t know what might have happened, but we take these threats seriously, and I commend the FBI for their vigilance and quick action in this case.”

“If someone makes violent threats, we’re going to take them at their word and investigate accordingly,” said Michael T. Harpster, Special Agent in Charge of the FBI’s Philadelphia Division. “While the FBI does not and will not police ideology, we stand ready to intervene whenever threatening language crosses the line into illegal activity. As always, protecting the public is our highest priority.”