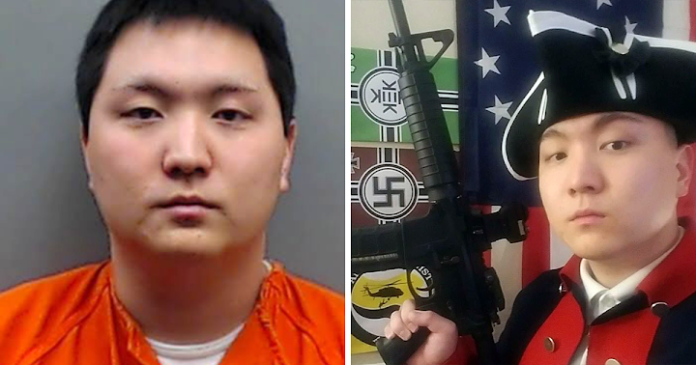 Heon Jong Yoo, a/k/a “Hank Yoo,” a/k/a “The Asian Nazi,” was found guilty on Nov. 15, 2018, of seven counts of false statements made in connection with firearms transactions and one count of unlawful possession by a prohibited person. Yoo was sentenced to 97 months in federal prison today by U.S. District Judge Robert W. Schroeder, III. Yoo was ordered to surrender to immigration officials for deportation after serving his sentence.

According to information presented in court, Yoo, a lawful permanent resident from South Korea, was an undergraduate student at the University of Texas-Tyler, when he falsely represented that he was a United States citizen with respect to seven different firearms transactions, some of which involved semiautomatic weapons. He did so after having been involuntarily committed to a mental institution in the state of New Jersey in 2013 and again in 2015. At the time of his arrest, Yoo was in possession of multiple firearms, ammunition, and firearms accessories. Yoo was initially indicted by a federal grand jury on Apr. 18, 2018. A superseding indictment was returned against him on Sep. 19, 2018.

“Law enforcement most likely saved lives with the arrest of Hank Yoo,” said United States Attorney Joseph D. Brown. “At multiple schools were he had attended, administrators had worried about his increasing threatening behavior. And when you mix in his history of mental issues and that he was lying to get access to firearms, the situation could have ended badly.”

“Questions on the ATF Form 4473 are designed to identify prohibitors such as felony offenses, adjudicated mental illness, or substance abuse,” stated ATF Special Agent in Charge Jeffrey C. Boshek II. “Yoo lied on the form, then compounded the lies by misusing the benefit afforded by a Texas Concealed Handgun License. His overall, evolving pattern of conduct sounded alarms at institutions and communities throughout Texas.”