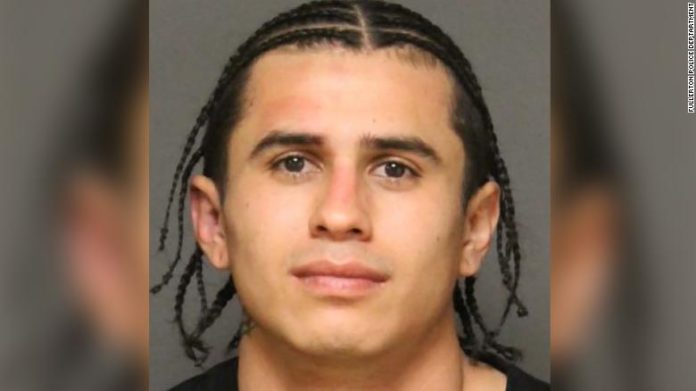 Fullerton, California — Early Sunday around 2 AM, police officers responded to the area of 100 W. Santa Fe Ave. regarding reports of several pedestrians who had been struck by a red Toyota Tacoma.

Upon arrival, officers found the truck had driven up onto the sidewalk, striking nine pedestrians before hitting a tree and coming to a rest.

Multiple victims were trapped underneath the truck, which was smoking, had serious front end damage, and it’s airbags deployed. With the help of some good Samaritans, officers were able to lift the truck enough to free the pedestrians that were stuck.

Fire officials responded and ultimately 10 victims were transported to local hospitals with injuries ranging from moderate to critical, life-threatening. The victims ranged in age from 18 years old to 49 years old.

Three other vehicles on the street were found with damage as well.

The driver of the truck, later identified as Christopher Solis, 22, of Anaheim, is suspected to have been driving under the influence of drugs at the time of the crash. He was placed under arrest for felony ‘DUI causing great bodily injury.’

Police say when the accident occurred, hundreds of people were on the sidewalk and in front of nearby restaurants and bars during closing time.